McAllen is the twenty-first most populous city in Texas and the largest city in Hidalgo County, Texas, United States. It is located at the southern tip of Texas in the Rio Grande Valley and is part of the Southern United States. It is on the Rio Grande, across from the Mexican city of Reynosa, and is approximately 70 miles (110 km) west of South Padre Island and the Gulf of Mexico. The 2010 United States census put the city's population at 129,877 and the McAllen–Edinburg–Mission metropolitan area at 774,773. It is ranked the fifth most populated metropolitan area in the state of Texas. The Reynosa–McAllen Metropolitan Area counts a population of nearly 1.5 million.

From its settlement in 1904, the area around McAllen was largely rural and agricultural in character, but the latter half of the 20th century saw steady growth, which accelerated during the 1980s, leading to an economic and population boom in the 1990s and 2000s. Today, the McAllen–Edinburg–Mission metropolitan area is one of the fastest growing metropolitan areas in the United States. The introduction of the maquiladora economy and the North American Free Trade Association led to a boom in international trade, cross-border commerce with Mexico, and health care.

In 1904 the Hidalgo and San Miguel Extension (now the Sam Fordyce Branch) of the St. Louis, Brownsville and Mexico Railway reached the Santa Anita Ranch. John McAllen and his son James donated land to the railroad to guarantee it would cross the area. On December 5, 1904, the McAllen Townsite Company was formed by Uriah Lott, Leonidas C. Hill, Sr., John McAllen, James Ballí McAllen, and John J. Young. The new community, which was named for John McAllen, had the depot nearest the county seat, Hidalgo, eight miles to the south.

By 1911, 5,000 acres was under cultivation in East McAllen with produce consisting of cotton, alfalfa, broom corn, citrus fruits, grapes, and figs. East McAllen had an estimated population of 1,000 that year, and West McAllen had ceased to exist. In 1911 the town applied for and was issued a charter of incorporation under the name McAllen. In 1916, 20,000 New York state troops were stationed at McAllen to help quell border disturbances. The resulting economic boom increased the population from 1,200 in 1916, to 6,000 in 1920.

McAllen adopted a home rule charter in 1927. Canning factories, a winery, tortilla plants, wood-working plants, and some oil exploration increased the population to 9,074 by 1930. In 1936 Hiram Garner opened the Valley Distillery, Incorporated, which produced wines from citrus juices. The town was a petroleum and farm chemurgic center with a population of 11,877 in 1940, by which time it had adopted the nickname the City of Palms. In 1941, a suspension bridge replaced the old bridge to Reynosa, Tamaulipas, Tamaulipas; the new toll bridge was purchased by the city and was named the McAllen-Hidalgo-Reynosa International Bridge. Its construction resulted in increased tourist trade, making McAllen a winter resort and port of entry to Mexico. The discovery of oil in the Reynosa area in 1947 resulted in a large migration of people from the Mexican interior, constituting a new tourist market and cheap labor supply for McAllen. The sister cities were linked as a result of the increased traffic between them. The population of McAllen was 20,005 in 1950 and 32,728 in 1960. The McAllen-Hidalgo-Reynosa International Bridge was the number-two port of entry into Mexico in 1954.

McAllen was an agricultural, oil, and tourist center in 1970, when the population reached 37,636. By the start of the 1970s, McAllen had a 200-bed hospital and a new air-conditioned high school, the first school in the nation featuring on-site power generated by natural-gas-powered turbines. The tourism industry continued to expand as people traveled to the area from both Mexico and the northern United States. The population continued to grow steadily through the 1970s, and reached 66,281 by 1980. During the late 1980s the McAllen Foreign Trade Zone was an important general-purpose foreign trade zone. At the time McAllen's main industries were retail, tourism and farming, and each was in trouble. The devaluation of the Mexican peso in the 1980s put a damper on cross-border shopping; local tourism was down because of the recession. In 1983 a freeze took out much of the valley's citrus crop.

In the mid-1980s, fueled by trade and the growth of the maquiladora (in which components are shipped to Mexico, assembled and shipped back), the economy began to improve in Hidalgo County. McAllen sits across the border from Reynosa, a large manufacturing centre. After the peso devalued it became easier to coax companies to put their plants in Mexico with support operations in Texas.

Although McAllen is named the City of Palms, tropical vegetation is only locally dominant. There are many thorny shrubs and deciduous trees in the area such as Rio Grande Ash (Fraxinus berlandieriana), Cedar Elm (Ulmus crassifolia) and Honey Mesquite (Prosopis glandulosa).

McAllen, like much of western South Texas, has a subtropical climate. Under the Köppen climate classification, the city features a hot semi-arid climate. The average high in January is 70 °F and the average low is 50 °F. The average high is 96 °F and the average low is 76 °F in August. The warm season is extremely long, as average high temperatures from May through September are above 90 °F (32 °C) and average low temperatures are above 70 °F (21 °C), with relatively high dew point values resulting in higher relative humidity values and heat index values. Heat index values can consistently reach over 100 °F during these months.

Average annual precipitation is only 21.60 inches (549 mm). Most precipitation occurs in the warm season, with the least precipitation distinctly occurring in the cooler winter. As September is the peak of the north Atlantic hurricane season and tropical storms and hurricanes occasionally drop copious amounts of rainfall on the region, this month tends to be by far the wettest, averaging 4.08 inches (104 mm) of rain. The driest month is March, with only 0.72 inches (18 mm) of precipitation. Since 1941, it has snowed once, when the city received 1.7 inches on December 25, 2004.

There were 33,151 households out of which 43.2% had children under the age of 18 living with them, 59.0% were married couples living together, 16.0% had a female householder with no husband present, and 21.3% were non-families. 17.9% of all households were made up of individuals and 6.4% had someone living alone who was 65 years of age or older. The average household size was 3.18 and the average family size was 3.64.

Metro McAllen (formerly McAllen Express Transit (MET)) has provided public transportation for the City of McAllen since June 1997. In the beginning, McAllen's public transportation system, McAllen Express (ME), was administered by the Lower Rio Grande Development Council. Since 2005, Metro McAllen has been operated as a Department of the City of McAllen. Metro McAllen now has seven fixed routes serving residents and visitors of McAllen. It operates six days out of the week, 13 hours per day.

Birdwatching – McAllen is positioned on the migratory path between North and South America, presenting bird and butterfly expeditions. The landscape hosts a diverse wildlife population.

The Quinta Mazatlan is the historic Spanish colonial mansion and is McAllen's wing of the World Birding Center.

The McAllen Dog Park is another place for recreation for dogs of all sizes. The lighted park is located off of Tamarack and 2nd Street. The park is divided into two sections.

Palm View Golf Course is located on South Ware Rd. just South of Highway 83. The golf course has 18 holes plus a driving range. This course hosts numerous tournaments year round.

Architecture and points of interest 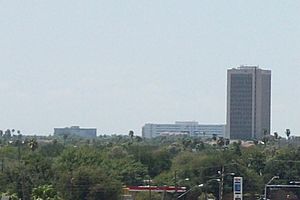 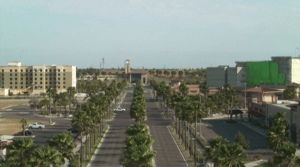 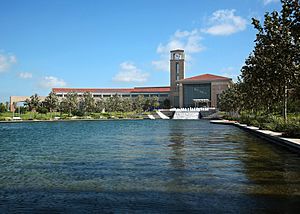 All content from Kiddle encyclopedia articles (including the article images and facts) can be freely used under Attribution-ShareAlike license, unless stated otherwise. Cite this article:
McAllen, Texas Facts for Kids. Kiddle Encyclopedia.