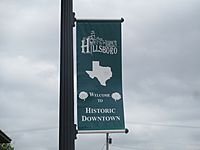 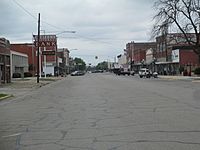 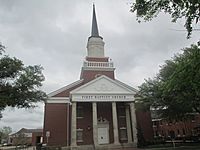 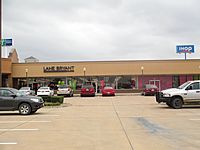 The outlet mall in Hillsboro is located east of Interstate 35.

Hillsboro is a city in and the county seat of Hill County in Central Texas. The population was 8,456 at the 2010 census.

Hillsboro, located on Interstate 35 where I-35E and I-35W split south of the Dallas–Fort Worth metroplex, is the primary center for trade and commerce in Hill County. It is located almost midway between the Metroplex and Waco, and is the gateway to the popular Lake Whitney. There are many antique stores located downtown, and a popular outlet mall is located along the Interstate, surrounded by numerous hotels and motels.

The city is known for its abundance of restored Victorian homes and its historic county courthouse, which on January 1, 1993 was heavily damaged by an electrical fire. It was rebuilt, courtesy of donations from around the world and two concerts sponsored by Hill County native Willie Nelson. The courthouse (See Hill County, Texas for photograph.) won the Downtown Association's 1999 award for "Best Restoration". The renovation sparked an interest in restoring Texas's historic courthouses. The Hill County courthouse is eight miles from Willie Nelson's hometown, Abbott.

The movie Bottle Rocket, starring Owen and Luke Wilson, was filmed here. They used the Days Inn motel, the Hillsboro High School football stadium, and Highway 171 leading out of Hillsboro.

Hillsboro was named for Hill County. At one point during Bonnie and Clyde's robberies in Hillsboro, they took the Peterson family hostage at their own farm. Later the Petersons said that Bonnie and Clyde held them at gun point until they surrendered their barn for them to sleep in for a few nights before running again.

There were 2,876 households out of which 33.4% had children under the age of 18 living with them, 47.3% were married couples living together, 14.4% had a female householder with no husband present, and 33.6% were non-families. 30.0% of all households were made up of individuals and 14.8% had someone living alone who was 65 years of age or older. The average household size was 2.69 and the average family size was 3.34.

Hillsboro was the first home of the Texas Musicians Museum, which relocated to nearby downtown Waxahachie in Ellis County for a short while, until the building owners filed for bankruptcy. Now open in a brand new multimillion-dollar facility in downtown Irving's Heritage Crossing District, the museum houses displays of Texas musicians and Texas music memorabilia, including the original casket of J.P. “The Big Bopper” Richardson whose body was reinterred in 2008.

Located a few miles north by northwest of Hillsboro, the Middlefaire site features a Renaissance Festival and Texas Pirate Festival.

The climate in this area is characterized by hot, humid summers and generally mild to cool winters. According to the Köppen Climate Classification system, Hillsboro has a humid subtropical climate, abbreviated "Cfa" on climate maps.

All content from Kiddle encyclopedia articles (including the article images and facts) can be freely used under Attribution-ShareAlike license, unless stated otherwise. Cite this article:
Hillsboro, Texas Facts for Kids. Kiddle Encyclopedia.