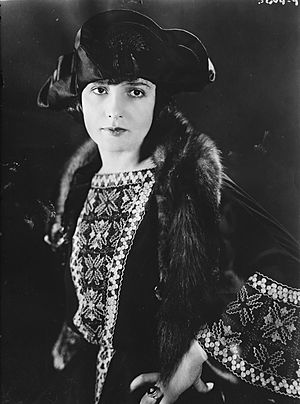 Madge Bellamy (June 30, 1899 – January 24, 1990) was an American stage and movie actress. She was born Margaret Derden Philpott in Hillsboro, Texas. She came from a good home, but ran away at 17 to become an actress and dancer in New York City.

She appeared in several plays, and made her first movie Passing Thru in 1920. After a dispute with Fox Films in 1929, she lost work. She returned to the screen in B-movies in 1932. She is probably best known today for playing Madeline in the horror movie White Zombie opposite Bela Lugosi.

The rest of her life was passed mostly in poverty. She sold tools in a store and was an unsuccessful novelist. She died in Upland, California of heart failure. Her autobiography was published shortly after her death. Her only marriage was brief and childless.

All content from Kiddle encyclopedia articles (including the article images and facts) can be freely used under Attribution-ShareAlike license, unless stated otherwise. Cite this article:
Madge Bellamy Facts for Kids. Kiddle Encyclopedia.