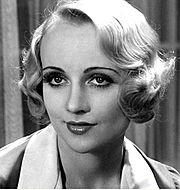 Lombard was born on October 06, 1908 in Fort Wayne, Indiana United States She studied at Virgil Jr. High School and then at Fairfax High School. She was married to William Powell from 1931 until they divorced in 1933. Then she was married to Clark Gable from 1939 until her death in 1942. She had no children. Lombard died on January 16, 1942 in a plane crash in Mount Potosi, Nevada, United States of America aged 33 years old.

All content from Kiddle encyclopedia articles (including the article images and facts) can be freely used under Attribution-ShareAlike license, unless stated otherwise. Cite this article:
Carole Lombard Facts for Kids. Kiddle Encyclopedia.