The Gold Rush facts for kids 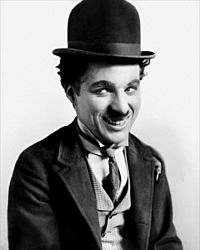 Chaplin as the Little Tramp

The Gold Rush is a 1925 silent movie. It was written, directed, and produced by Charlie Chaplin. He stars in the movie, too.

The movie is set in the Yukon during the Klondike Gold Rush. Chaplin plays the Little Tramp. It was a character he created.

The Little Tramp appeared in many Chaplin movies. In this movie, the Little Tramp has many adventures with other prospectors. He falls in love with a saloon girl.

In 1992 The Gold Rush was selected for preservation in the United States National Film Registry. Chaplin hoped that people would remember him for this movie.

Chaplin decided to make this movie when he saw photos of the Klondike Gold Rush and heard a story of a group of American pioneers who had to eat their leather shoes to survive. Chaplin, who believed tragedies and comics were not far from each other, decided to combine these stories of deprivation and horror in comedy. He decided that his famous rogue figure should become a gold-digger who joins a brave optimist determined to face all the pitfalls associated with the search for gold, such as sickness, hunger, loneliness, or the possibility that he may at any time be attacked by a grizzly. The movie shows scenes like Chaplin cooking and dreaming of his shoe, or how his starving friend Big Jim sees him as a chicken.

The Gold Rush received Academy Award nominations for the Best Music and Best Sound Recording upon its re-release in 1942. It is today one of Chaplin's most celebrated works, and he himself declared several times that it was the film for which he most wanted to be remembered. 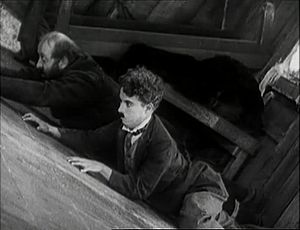 Big Jim and the Lone Prospector in the wobbling cabin

The Gold Rush was a huge success in the US and worldwide. It is the fifth-highest-grossing silent film in cinema history, taking in more than $4,250,001 at the box office in 1926. Chaplin proclaimed at the time of its release that this was the film for which he wanted to be remembered.

It earned United Artists $1 million and Chaplin himself a profit of $2 million.

All content from Kiddle encyclopedia articles (including the article images and facts) can be freely used under Attribution-ShareAlike license, unless stated otherwise. Cite this article:
The Gold Rush Facts for Kids. Kiddle Encyclopedia.