John Barrymore (born John Sidney Blyth; February 14 or 15, 1882 – May 29, 1942) was an American actor on stage, screen and radio. A member of the Drew and Barrymore theatrical families, he initially tried to avoid the stage, and briefly attempted a career as an artist, but appeared on stage together with his father Maurice in 1900, and then his sister Ethel the following year. 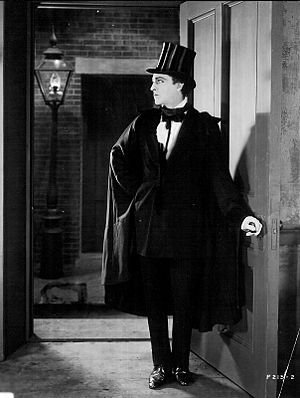 He began his career in 1903 and first gained attention as a stage actor in light comedy, then high drama, culminating in productions of Justice (1916), Richard III (1920) and Hamlet (1922); his portrayal of Hamlet led to him being called the "greatest living American tragedian".

After a success as Hamlet in London in 1925, Barrymore left the stage for 14 years and instead focused entirely on films. In the silent film era, he was well received in such pictures as Dr. Jekyll and Mr. Hyde (1920), Sherlock Holmes (1922) and The Sea Beast (1926). During this period, he gained his nickname, the Great Profile.

His stage-trained voice proved an asset when sound films were introduced, and three of his works, Grand Hotel (1932), Twentieth Century (1934) and Midnight (1939) have been inducted into the National Film Registry. 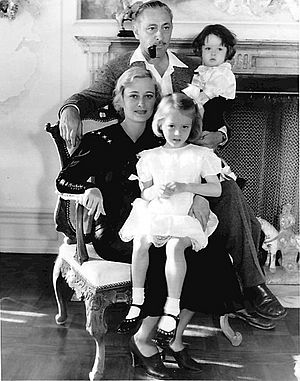 Barrymore's personal life has been the subject of much attention before and since his death. He struggled with alcohol from the age of 14, was married and divorced four times, and declared bankruptcy later in life. Much of his later work involved self-parody and the portrayal of drunken has-beens. Barrymore's biographer, Martin Norden, considers him to be "perhaps the most influential and idolized actor of his day".

In October 1940, Barrymore returned to the NBC Radio network. On May 19, 1942, while recording a line from Romeo and Juliet for the show, Barrymore collapsed. He was taken to the Hollywood Presbyterian Hospital and died there on May 29, from cirrhosis of the liver and kidney failure, complicated by pneumonia. Barrymore was buried at Calvary Cemetery in Los Angeles on June 2. In 1980, Barrymore's son had his father's body re interred at Philadelphia's Mount Vernon Cemetery. 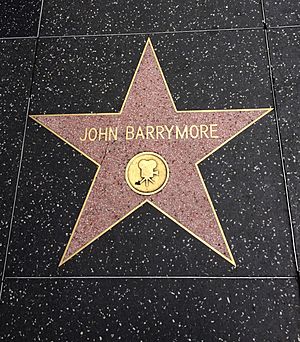 Barrymore's star on the Hollywood Walk of Fame

The New York Times obituary stated that the actor was accepted by most critics as the foremost English-speaking actor of his time. The Washington Post agreed, noting that during his stage triumphs and early years in film, he was the great profile, the darling of the 'royal family' of the stage."

Barrymore was honored on few occasions by the entertainment industry and its members. Although both his brother and sister won Academy Awards, the only award Barrymore ever received for his screen work was from Rudolph Valentino in 1925 for Beau Brummel. Valentino created an award in his own name and felt that his fellow actors should receive accolades for their screen work.

When Barrymore attended his ceremony at Grauman's Chinese Theatre in 1940, he left more than the customary hand and footprints in the theater's forecourt: aided by the owner, Sid Grauman, Barrymore left a cement imprint of his facial profile.

In February 1960, for his contribution to the motion picture industry, Barrymore was inducted into the Hollywood Walk of Fame with a star at 6667 Hollywood Boulevard; Barrymore, along with his two siblings, is included in the American Theater Hall of Fame.

The Barrymore "Royal Family" of actors continued through two of his children – his son with Costello, John Drew Barrymore and his daughter with Oelrichs, Diana – both of whom became actors, as did John Jr.'s daughter Drew. 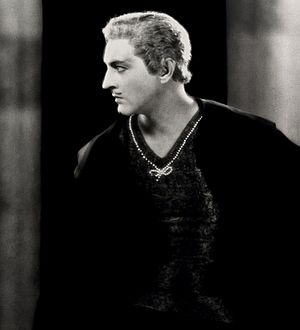 John Barrymore in The Beloved Rogue

Barrymore's achievements and his colorful life have ensured that several biographical studies followed his 1926 autobiography, Confessions of an Actor.

There were several celebratory events in 1982, on the centenary of Barrymore's birth. The Academy of Motion Picture Arts and Sciences and the Museum of Modern Art jointly hosted a commemorative program of his work. The same year, in celebration of the centenary of the Actors Fund of America, the US Postal Service issued a postage stamp featuring Barrymore and his siblings.

In February 2010, an intersection in Fort Lee, New Jersey, was renamed John Barrymore Way on what would have been the actor's 128th birthday. The intersection marked the spot of the former Buckheister's Hotel, where Barrymore had his 1900 stage debut in "A Man of the World".

All content from Kiddle encyclopedia articles (including the article images and facts) can be freely used under Attribution-ShareAlike license, unless stated otherwise. Cite this article:
John Barrymore Facts for Kids. Kiddle Encyclopedia.