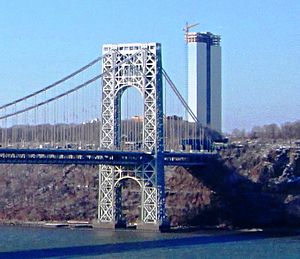 The George Washington Bridge, connecting Fort Lee (above) in Bergen County across the Hudson River to New York City, is the world's busiest motor vehicle bridge. One of two 47-story residential skyscrapers, Bergen County's tallest, is seen under construction near the gateway to the bridge in December 2013.

Fort Lee is a borough at the eastern border of Bergen County, New Jersey, United States, in the New York City Metropolitan Area, situated atop the Hudson Palisades. As of the 2010 United States Census, the borough's population was 35,345, reflecting a decline of 116 (−0.3%) from the 35,461 counted in the 2000 Census, which had in turn increased by 3,464 (+10.8%) from the 31,997 counted in the 1990 Census. The borough is the western terminus of the George Washington Bridge and is located across the Hudson River from the Manhattan borough of New York City. Named for the site of an early American Revolutionary War military encampment, it later became the birthplace of the American film industry.

The borough is situated atop the escarpment of the Hudson Palisades on the peninsula between the Hackensack and Hudson rivers. The borough is bisected by the confluence of roads at GWB Plaza leading to the George Washington Bridge.

Unincorporated communities, localities and place names located partially or completely within the borough include Coytesville, Palisade and Taylorville. 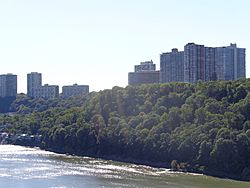 Established residential high-rises are a prominent feature of the borough of Fort Lee, with several over 300 feet tall.

Fort Lee is named for General Charles Lee after George Washington and his troops had camped at Mount Constitution overlooking Burdett's Landing, in defense of New York City. It was during Washington's retreat in November 1776 (beginning along a road which is now Main Street) that Thomas Paine composed his pamphlet, The American Crisis, which began with the recognized phrase, "These are the times that try men's souls." These events are recalled at Monument Park and Fort Lee Historic Park.

The history of cinema in the United States can trace its roots to the East Coast where, at one time, Fort Lee was the motion picture capital of America. The industry got its start at the end of the 19th century with the construction of Thomas Edison's "Black Maria", the first motion picture studio in West Orange, New Jersey. New Jersey offered land at costs considerably less than New York City, and the cities and towns on the North River (Hudson River) and Hudson Palisades benefited greatly as a result of the phenomenal growth of the film industry at the turn of the 20th century.

Film-making began attracting both capital and an innovative workforce, and when the Kalem Company began using Fort Lee in 1907 as a location for filming in the area, other filmmakers quickly followed. In 1909, a forerunner of Universal Studios, the Champion Film Company, built the first studio. They were quickly followed by others who either built new studios or who leased facilities in Fort Lee. In the 1910s and 1920s, film companies such as the Independent Moving Pictures Company, Peerless Studios, The Solax Company, Éclair Studios, Goldwyn Picture Corporation, American Méliès (Star Films), World Film Company, Biograph Studios, Fox Film Corporation, Pathé Frères, Metro Pictures Corporation, Victor Film Company, and Selznick Pictures Corporation were all making pictures in Fort Lee. Such notables as Mary Pickford got their start at Biograph Studios.

With the offshoot businesses that sprang up to service, the film studios, for nearly two decades Fort Lee experienced unrivaled prosperity. However, just as the development of Fort Lee production facilities were gaining strength, Nestor Studios of Bayonne, New Jersey, built the first studio in Hollywood in 1911. Nestor Studios, owned by David and William Horsley, later merged with Universal Studios; and William Horsley's other company, Hollywood Film Laboratory, is now the oldest existing company in Hollywood, now called the Hollywood Digital Laboratory. California's more hospitable and cost-effective climate led to the eventual shift of virtually all filmmaking to the West Coast by the 1930s. At the time, Thomas Edison owned almost all the patents relevant to motion picture production. Movie producers on the East Coast acting independently of Edison's Motion Picture Patents Company were often sued or enjoined by Edison and his agents, while movie makers working on the West Coast could work independently of Edison's control.

Television and film in New Jersey remains an important industry. Since 2000, the Fort Lee Film Commission has been charged with celebrating the history of film in Fort Lee, as well as attracting film and television production companies to the borough.

In 1957, market researcher James Vicary claimed that quickly flashing messages on a movie screen, in Fort Lee, had influenced people to purchase more food and drinks. Vicary coined the term subliminal advertising and formed the Subliminal Projection Company based on a six-week test. Vicary claimed that during the presentation of the movie Picnic he used a tachistoscope to project the words "Drink Coca-Cola" and "Hungry? Eat popcorn" for 1/3000 of a second at five-second intervals. Vicary asserted that during the test, sales of popcorn and Coke in that New Jersey theater increased 57.8% and 18.1% respectively.

In 1962, Vicary admitted to lying about the experiment and falsifying the results, the story itself being a marketing ploy. An identical experiment conducted by Henry Link showed no increase in cola or popcorn sales. The claim that the small cinema handled 45,699 visitors in six weeks has led people to believe that Vicary actually did not conduct his experiment at all.

Since 2007, the Hudson Shakespeare Company has brought their Shakespeare in the Park touring shows to Fort Lee in "Shakespeare Tuesdays". The group now performs regularly at Monument Park (1588 Palisade Avenue, next to the Fort Lee Museum) with 2 Tuesday shows per month for each month of the summer. The festival also tours similar dates in Hackensack.

Fort Lee is served by the Palisades Interstate Parkway, Route 4, Route 5, Route 67, Interstate 95 (the northern terminus of the New Jersey Turnpike), U.S. Route 9W, U.S. Route 1-9, U.S. Route 46, and County Route 505. The George Washington Bridge (signed as I-95/US 1-9/US 46), the world's busiest motor vehicle bridge, crosses the Hudson River from Fort Lee to the Washington Heights neighborhood of Upper Manhattan in New York City. Many of these roads converge at GWB Plaza, a busy crossroads at the northern end of the borough.

As of 2016[update] two Taiwanese airlines, China Airlines and EVA Air, provides private bus services to and from John F. Kennedy International Airport in New York City for customers based in New Jersey. These bus services stop in Fort Lee. 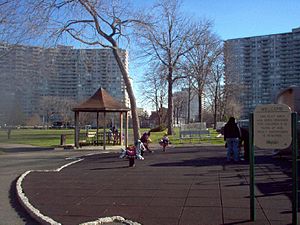 Constitution Park in Fort Lee. In the background are the Mediterranean Towers apartment complex.

All content from Kiddle encyclopedia articles (including the article images and facts) can be freely used under Attribution-ShareAlike license, unless stated otherwise. Cite this article:
Fort Lee, New Jersey Facts for Kids. Kiddle Encyclopedia.