Ridgefield was incorporated as a borough by an act of the New Jersey Legislature on May 26, 1892, from portions of Ridgefield Township. The borough was named for the area's terrain.

At the time of European colonization, the area was home to the Hackensack tribe of the Lenape Native Americans, who maintained a large settlement to the north on Overpeck Creek. Their name is an exonym taken from the territory and is translated as place of stony ground which describes the diminishing Hudson Palisades as they descend into the Meadowlands becoming the ridgefield that is part of Hackensack River flood plain.

In 1642, Myndert Myndertsen received a patroonship as part of the New Netherland colony for much the land in the Hackensack and Passaic valleys. He called his settlement Achter Kol, or rear mountain pass, which refers to its accessibility to the interior behind the Palisades. Originally spared in the conflicts that begin with the Pavonia Massacre, the nascent colony was later abandoned. In 1655, Oratam, sachem of the Hackensack, deeded a large tract nearby to Sara Kiersted, who had learned the native language and was instrumental in negotiations between Native Americans and the settlers. In 1668, much of the land between Overpeck Creek and the Hudson River was purchased by Samuel Edsall, and soon became known as the English Neighborhood, despite the fact most of the settlers were of Dutch and Huguenot origin. 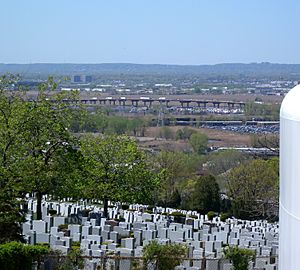 The opening of the West Shore Railroad and Erie Railroad's Northern Branch in the mid 19th century brought suburbanization to the region, and in Ridgefield, significant industry and manufacturing. Grantwood was an artist's colony established in 1913 by Man Ray, Alfred Kreymborg and Samuel Halpert and became known as the "Others" group of artists. The colony consisted of a number of clapboard shacks on a bluff. To this day the names of the streets in this part of the town — Sketch Place, Studio Road and Art Lane — pay homage to Grantwood's history. Kreymborg moved to Ridgefield and launched Others: A Magazine of the New Verse with Skipwith Cannell, Wallace Stevens, and William Carlos Williams in 1915.

The initial 118 miles (190 km) of the New Jersey Turnpike were completed in 1952, with the original northern terminus at an interchange connecting to Route 46 in Ridgefield. An additional four-mile stretch of road connecting the Turnpike from Ridgefield to Interstate 80 in Teaneck and from there to the George Washington Bridge was completed in 1964. The western spur was added in the 1970s, with its two spurs re-connecting in the western side of the borough.

In the 1970s, the area came under the auspices of the Hackensack Meadowlands Development Commission, meant to set parameters and balance development in the ecologically sensitive region. Some parts of the low-lying areas, including Skeetkill Creek Marsh, have been set apart as nature reserves and extension of system that connects to the Overpeck Reserve and Overpeck County Park. 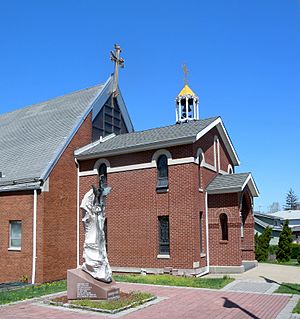 The borough is informally divided into three sections based on the geographical contour of the land. The first section is known as Ridgefield, and lies partly in the valley on both the east and west sides and partly on the first hill. The second section is known as Morsemere, and is located in the northern part of the borough. The third section is Ridgefield Heights, on the second hill at the extreme eastern part of the borough, running north and south.

Morsemere was named by a real estate development company in honor of Samuel F. B. Morse, inventor of the telegraph and Morse code. During the middle of the 19th century, Morse owned vast tracts of land in the Ridgefield section of the borough. Ridgefield's telephone exchange was Morsemere 6 until dial service arrived in the mid-1950s.

Undercliff Junction is an unincorporated community located within Ridgefield.

The New Jersey Turnpike (Interstate 95) passes through Ridgefield. The Turnpike's Vince Lombardi service area is located between Interchanges 18E/18W and the George Washington Bridge at mileposts 116E on the Eastern Spur and 115.5W on the Western Spur.

Original plans for the Hudson–Bergen Light Rail included a northern terminus at the park and ride. Plans for an extension through the town called the Northern Branch Corridor Project call for a station in the borough along the Northern Branch right-of-way at Hendricks Parkway.

All content from Kiddle encyclopedia articles (including the article images and facts) can be freely used under Attribution-ShareAlike license, unless stated otherwise. Cite this article:
Ridgefield, New Jersey Facts for Kids. Kiddle Encyclopedia.