Kids Encyclopedia Facts
"Little Ferry" redirects here. It is not to be confused with Little Ferry Yard.

Little Ferry was formed by an act of the New Jersey Legislature on September 18, 1894, from portions of Lodi Township and New Barbadoes Township, based on the results of a referendum held two days earlier. The borough was formed during the "Boroughitis" phenomenon then sweeping through Bergen County, in which 26 boroughs were formed in the county in 1894 alone.

During the colonial era, the borough was the site of an important ferry crossing between the region's towns at Bergen and Hackensack, which was operated by rope on the site starting in 1659, continuing until 1826 when it was replaced by a bridge on the Bergen Turnpike.

Gethsemane Cemetery, an African burial ground, was opened in 1860 and was used for interments until 1924. The site was added to the National Register of Historic Places in 1994.

Rosie's Diner (formerly the Farmland Diner) was used in the 1970s for the filming of Bounty paper towel commercials featuring Nancy Walker as Rosie the Waitress.

New Jersey Monthly magazine ranked Little Ferry 35th in its 2008 rankings of the "Best Places To Live" in New Jersey.

The borough lies near the confluence of the Hackensack River and Overpeck Creek in the New Jersey Meadowlands. 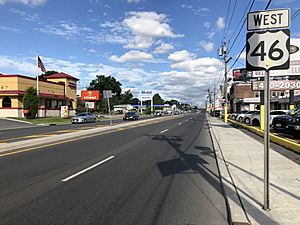 The Little Ferry Circle connected U.S. Route 46 and Bergen Turnpike. The circle was originally constructed in 1933 in conjunction with the nearby Route 46 Hackensack River Bridge, which crosses the river to Ridgefield Park and beyond to the George Washington Bridge.The circle was largely reconstructed in 1985, allowing vehicles traveling on Route 46 to pass directly through the circle. The circle has been a constant site of accidents, with 40-50 accidents per year at the circle each year from 2004 through 2006. In March 2007, the New Jersey Department of Transportation proposed its latest plan to address issues at the circle. The plan would realign the circle into a straight intersection, complete with turning lanes; prohibit left turns onto many residential streets; and would include construction of a pump station to move water off the oft-flooded highway and into the Hackensack River. This plan was later completed, with the circle no longer in existence.

NJ Transit bus routes 161 and 165 provide service between Little Ferry and the Port Authority Bus Terminal in Midtown Manhattan, with local service on the 772 route.

The Little Ferry Seaplane Base (FAA LID: 2N7) is a public-use seaplane base located 1-mile (1.6 km) east of the borough's central business district, on the Hackensack River. The base is privately owned.

The Little Ferry Public Schools serve students in kindergarten through eighth grade. As of the 2018–19 school year, the district, comprised of two schools, had an enrollment of 900 students and 78.6 classroom teachers (on an FTE basis), for a student–teacher ratio of 11.5:1. The district's two school buildings are located across the street from each other. Schools in the district (with 2018–19 enrollment data from the National Center for Education Statistics) are Washington Elementary School with 466 students in grades PreK-4 and Memorial Middle School with 401 students in grades 5-8.

Since Little Ferry does not have its own high school, students in public school for ninth through twelfth grades attend Ridgefield Park High School, in Ridgefield Park only a couple of minutes away, as part of a sending/receiving relationship with the Ridgefield Park Public Schools that has been in place since 1953. As of the 2018–19 school year, the high school had an enrollment of 1,196 students and 89.0 classroom teachers (on an FTE basis), for a student–teacher ratio of 13.4:1.

Public school students from the borough, and all of Bergen County, are eligible to attend the secondary education programs offered by the Bergen County Technical Schools, which include the Bergen County Academies in Hackensack, Applied Technology High School, located at Bergen Community College in Paramus, and the Bergen Tech campus in Teterboro, Paramus. The district offers programs on a shared-time or full-time basis, with admission based on a selective application process and tuition covered by the student's home school district.

People who were born in, residents of, or otherwise closely associated with Little Ferry include:

All content from Kiddle encyclopedia articles (including the article images and facts) can be freely used under Attribution-ShareAlike license, unless stated otherwise. Cite this article:
Little Ferry, New Jersey Facts for Kids. Kiddle Encyclopedia.