Teterboro ( TEE-tər-BƏR-oh) is a borough in Bergen County, in the U.S. state of New Jersey. As of the 2010 United States Census, the borough's population was 67, reflecting an increase of 49 (+272.2%) from the 18 counted in the 2000 Census, which had in turn declined by 4 (−18.2%) from the 22 counted in the 1990 Census. After being ranked as the fourth-smallest municipality, by population, in New Jersey through the 2010 census, the borough is the third-smallest since the combination of Pine Valley into Pine Hill in 2022.

Teterboro is the home of Teterboro Airport (operated by the Port Authority of New York and New Jersey) which takes up a majority of the borough, as well as portions of Hasbrouck Heights and Moonachie.

Teterboro was incorporated on March 26, 1917, from land taken from the boroughs of Moonachie and Little Ferry and from Lodi Township. The borough was enlarged on July 5, 1918, by the addition of an area annexed from Hasbrouck Heights. The name Teterboro was changed on April 14, 1937, to Bendix Borough, but changed back to Teterboro Borough on June 1, 1943. The borough was named for Walter C. Teter, a New York investment banker, who had purchased land in 1917 to build a racetrack and developed a 700-acre (280 ha) site, reclaiming marshland and building an airport and an 18-hole golf course.

In the past, neighboring municipalities, such as Hasbrouck Heights and South Hackensack, have attempted to dissolve Teterboro, in hopes of absorbing the town's ratables. Some people have reasoned that the population is too small for the borough to justify its own existence. However, all such attempts have met with failure, due to resistance from residents, business owners and municipal officials. In July 2010, a bill was introduced in the New Jersey state senate in a renewed effort to divide Teterboro among neighboring towns. The bill stalled in the state Legislature after its introduction, due to opposition from the borough as well as the neighboring municipalities of Moonachie and Hasbrouck Heights. The legality of a 20-year tax abatement proposed for Teterboro businesses within the bill, which had been included to alleviate concerns of property owners that taxes could spike if the borough was dissolved, was also called into question.

There were 25 households out of which 28.0% had children under the age of 18 living with them, 36.0% were married couples living together, 12.0% had a female householder with no husband present, and 48.0% were non-families. 32.0% of all households were made up of individuals, and 20.0% had someone living alone who was 65 years of age or older. The average household size was 2.68 and the average family size was 3.85. 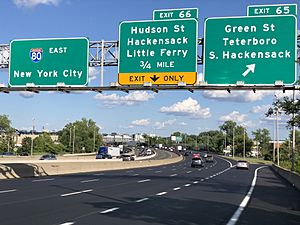 I-80 eastbound on the border of South Hackensack and Teterboro 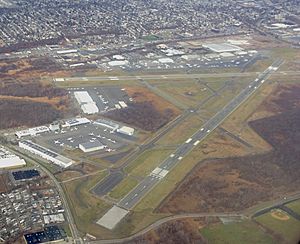 Teterboro Airport is owned and operated by the Port Authority of New York and New Jersey.

Teterboro is served by NJ Transit at the Teterboro train station, located on Williams Avenue near Route 17. The station offers service on the Pascack Valley Line, which runs north–south to Hoboken Terminal with connections via the Secaucus Junction transfer station to New Jersey Transit one-stop service to New York Penn Station and to other NJ Transit rail service, and at Hoboken Terminal to other New Jersey Transit rail lines, the PATH train at the Hoboken PATH station, New York Waterways ferry service to the World Financial Center and other destinations and Hudson-Bergen Light Rail service.

NJ Transit provides bus service on the 161 (on Route 46), 164 and 165 routes to the Port Authority Bus Terminal in Midtown Manhattan, to Newark on the 76 route, with local service on the 772 route.

All content from Kiddle encyclopedia articles (including the article images and facts) can be freely used under Attribution-ShareAlike license, unless stated otherwise. Cite this article:
Teterboro, New Jersey Facts for Kids. Kiddle Encyclopedia.