The Palisades, also called the New Jersey Palisades or the Hudson River Palisades, are a line of steep cliffs along the west side of the lower Hudson River in Northeastern New Jersey and Southeastern New York in the United States. The cliffs stretch north from Jersey City about 20 miles (32 km) to near Nyack, New York, and visible at Haverstraw, New York. They rise nearly vertically from near the edge of the river, and are about 300 feet (90 m) high at Weehawken, increasing gradually to 540 feet (160 m) high near their northern terminus. North of Fort Lee, the Palisades are part of Palisades Interstate Park and are a National Natural Landmark.

The Palisades are among the most dramatic geologic features in the vicinity of New York City, forming a canyon of the Hudson north of the George Washington Bridge, as well as providing a vista of the Manhattan skyline. They sit in the Newark Basin, a rift basin located mostly in New Jersey.

Palisade is derived from the same root as the word pole, ultimately from the Latin word palus, meaning stake. A "palisade" is, in general, a defensive fence or wall made up of wooden stakes or tree trunks. The Lenape called the cliffs "rocks that look like rows of trees", a phrase that became "Weehawken", the name of a town in New Jersey that sits at the top of the cliffs across from Midtown Manhattan.

The basalt cliffs are the margin of a diabase sill, formed about 200 million years ago, at the close of the Triassic Period by the intrusion of molten magma upward into sandstone. The molten material cooled and solidified before reaching the surface. Water erosion of the softer sandstone left behind the columnar structure of harder rock that exists today. The cliffs are about 300 ft (100 m) thick in sections and originally may have reached 1,000 ft (300 m).

The end-Triassic extinction event that coincided with the formation of the Hudson Palisades, Central Atlantic Magmatic Province, 200 million years ago ranks second in severity of the five major extinction episodes that span geologic time. The most severe extinction in the past 500 million years was the Permian–Triassic extinction event, informally known as the Great Dying, coincided with flood basalt eruptions that produced the Siberian Traps, which constituted one of the largest known volcanic events on Earth and covered over 770,000 sq mi (2,000,000 km2) with lava.

Franklyn Van Houten did trailblazing research on a rock formation known as the Newark Basin. His discovery of a consistent geological pattern in which lake levels rose and fell is now known as the "Van Houten cycle". 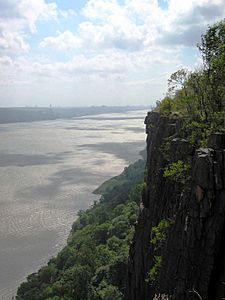 Looking south down the Hudson from the Palisades

The Palisades appear on the first European map of the New World, made by Gerardus Mercator in 1541 based on the description given him by Giovanni da Verrazano, who suggested they look like a "fence of stakes".

During the early stages of the American Revolution, British military Commander Lord Cornwallis landed a force of between 2,500 and 5,000 at the Closter Dock Landing on Nov. 20, 1776. In an effort to ambush American General George Washington and crush the rebellion in the wake of the rebel's defeat in the Battle of Brooklyn and the Battle of Fort Washington, Cornwallis marched his men up the steep Palisades and southward through the Northern Valley. Washington, stationed at Fort Lee, was alerted to the ambush effort by an unknown horseback patriot, remembered only as the Closter Rider, and successfully fled west through Englewood and over the Hackensack River, avoiding capture in what is remembered as Washington's Retreat.

The Palisades were the site of 18 documented duels and probably many unrecorded ones in the years 1798–1845. The most famous is the Burr–Hamilton duel between Alexander Hamilton and Aaron Burr, which took place in a spot known as the Heights of Weehawken on July 11, 1804.

After the Civil War, signs advertising patent medicines and other products covered the rock face in letters 20 feet (6.1 m) high.

In the 19th century, the cliffs were heavily quarried for railroad ballast, leading to local efforts to preserve them. Beginning in the 1890s, several unsuccessful efforts were made to turn much of the Highlands into a forest preserve. Fearing that they would soon be put out of business, quarry operators responded by working faster: in March 1898 alone, more than three tons of dynamite was used to bring down Washington Head and Indian Head in Fort Lee, New Jersey producing several million cubic yards of traprock. The following year, work by the New Jersey Federation of Women's Clubs led to the creation of the Palisades Interstate Park Commission, headed by George W. Perkins, which was authorized to acquire land between Fort Lee and Piermont, New York; its jurisdiction was extended to Stony Point, New York in 1906.

In 1908, the State of New York announced plans to move Sing Sing Prison to Bear Mountain. Work was begun in the area near Highland Lake (renamed Hessian Lake) and in January 1909, the state purchased the 740-acre (3.0 km2) Bear Mountain tract. Conservationists, inspired by the work of the Palisades Interstate Park Commission, lobbied successfully for the creation of the Highlands of the Hudson Forest Preserve. However, the prison project was continued. Mary Averell Harriman, whose husband, Union Pacific Railroad president E. H. Harriman died in September of that year, offered the state another 10,000 acres (40 km2) and one million dollars toward the creation of a state park. George Walbridge Perkins, who served as president of the Palisades Interstate Park Commission from its creation in 1900 until his death in 1920, with whom she had been working, raised another $1.5 million from a dozen wealthy contributors including John D. Rockefeller and J. P. Morgan. New York state appropriated a matching $2.5 million and the state of New Jersey appropriated $500,000 to build the Henry Hudson Drive (which would be succeeded by the Palisades Interstate Parkway in 1947). Ultimately, the Sing Sing relocation was discontinued.

In the 1910s, when Fort Lee was a center of film production, the cliffs were frequently used as film locations. The most notable of these films was The Perils of Pauline, a serial which helped popularize the term cliffhanger.

In October 1931, after four years of construction, the George Washington Bridge opened between Upper Manhattan and Fort Lee.

In June 1983, the Palisades were designated a National Natural Landmark by the National Park Service.

The Palisades is now a part of Palisades Interstate Park, a popular destination for hiking and other outdoor recreational activities, that also includes Harriman-Bear Mountain State Park, Minnewaska State Park Preserve and several other parks and historic sites in the region.

On June 23, 2015, officials of the South Korean conglomerate LG Group announced that their planned new North American headquarters building in Englewood Cliffs, New Jersey, which was originally designed to be 143 feet (44 m) tall, and would have broken the tree line on top of the Palisades, would be reduced to 69 feet (21 m) in height, thus preserving the contour of the ridge. The new building had been opposed by numerous conservation groups and politicians, including four former governors of New Jersey.

The Palisades, with fall foliage. On the left is the George Washington Bridge. A controversial plan to build highrises that would break the tree line has been proposed by LG Electronics

All content from Kiddle encyclopedia articles (including the article images and facts) can be freely used under Attribution-ShareAlike license, unless stated otherwise. Cite this article:
The Palisades (Hudson River) Facts for Kids. Kiddle Encyclopedia.