Kids Encyclopedia Facts
Not to be confused with Englewood, New Jersey.

The borough's formation dates back to an election for Road Commissioner in Road District 1 between William Outis Allison and Clinton Blake, a future mayor of Englewood. Blake won the vote, but Allison challenged the result, arguing that women had been improperly allowed to vote. The vote was overturned, but Englewood officials would not seat Allison; this ultimately led to his successful efforts in 1895 to have Road District 1 secede to form the Borough of Englewood Cliffs, with Allison serving as the new municipality's first mayor.

Englewood Cliffs was formed as a borough on May 10, 1895, from portions of the now defunct townships of Englewood Township and Palisades Township, based on the results of a referendum held the previous day. The borough was formed during the "Boroughitis" phenomenon then sweeping through Bergen County, as of one two boroughs created in 1895 after 26 boroughs had been formed in the county in 1894 alone. 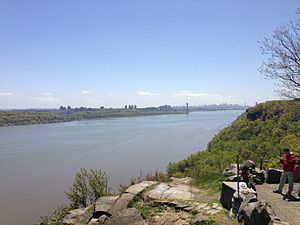 The borough borders Englewood, Fort Lee and Tenafly in Bergen County, and the New York City boroughs of The Bronx and Manhattan across the Hudson River.

There were 1,824 households out of which 30.7% had children under the age of 18 living with them, 73.1% were married couples living together, 8.2% had a female householder with no husband present, and 16.3% were non-families. 14.3% of all households were made up of individuals, and 10.0% had someone living alone who was 65 years of age or older. The average household size was 2.87 and the average family size was 3.17.

Korean Americans accounted for 20.3% of the borough's population. Englewood Cliffs has witnessed expansion of this demographic from the adjoining Fort Lee Koreatown, as well as from the borough's status as the North American headquarters of the LG Corporation, based in Seoul. The Korean language is spoken at home by more than half of the residents of Englewood Cliffs, according to U.S. Census Bureau data released in 2017.

Same-sex couples headed 10 households in 2010, an increase from the three counted in 2000. 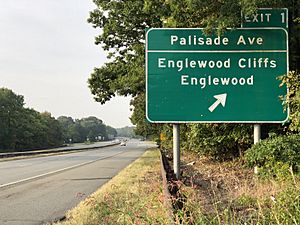 View south along the Palisades Interstate Parkway in Englewood Cliffs

U.S. Route 9W and the Palisades Interstate Parkway both run alongside each other for about 2.8 miles (4.5 km) along the Hudson River from Fort Lee in the south to Tenafly in the north. County Route 505 (Hudson Terrace / Palisades Avenue) travels through the borough from Fort Lee in the south to Englewood in the east. Motorists can also take a scenic drive along Henry Hudson Drive at the Palisades Interstate Park, which is accessible via Dyckman Hill Road. 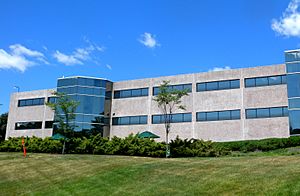 LG Electronics held a groundbreaking ceremony on November 14, 2013, to build an environmentally friendly North American headquarters in Englewood Cliffs, having received a favorable legal decision subsequently being appealed based upon building height issues. Protesters have sharply criticized the proposal, arguing that the 143-foot (44 m) height of the building exceeds the borough's 35-foot (11 m) limit and that the height of the building above the tree line will disrupt views of the Palisades.

In 2017, Maserati announced it was moving its U.S. headquarters from Englewood Cliffs to the former Walter P. Chrysler Museum in Auburn Hills, Michigan.

The Englewood Cliffs Public Schools serves children in pre-kindergarten through eighth grade. As of the 2018–19 school year, the district, comprised of two schools, had an enrollment of 500 students and 54.5 classroom teachers (on an FTE basis), for a student–teacher ratio of 9.2:1. Schools in the district (with 2014-15 enrollment data from the National Center for Education Statistics) are North Cliff School with 216 students in grades PreK–2 and Upper School with 331 students in grades 3–8.

The school district has a sending/receiving relationship with the Englewood Public School District under which students attend public high school at Dwight Morrow High School in Englewood. As of the 2018–19 school year, the high school had an enrollment of 1,063 students and 83.5 classroom teachers (on an FTE basis), for a student–teacher ratio of 12.7:1.

The borough does not have its own public library. After a 47-year-long relationship with the Englewood Public Library under which the borough paid $225,000 to allow borough residents to use the city's library, Englewood Cliffs started negotiations in 2016 with other municipalities to pay for privileges elsewhere.

People who were born in, residents of, or otherwise closely associated with Englewood Cliffs include: 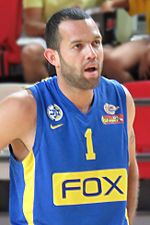 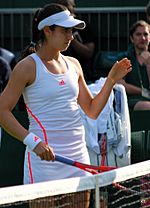 All content from Kiddle encyclopedia articles (including the article images and facts) can be freely used under Attribution-ShareAlike license, unless stated otherwise. Cite this article:
Englewood Cliffs, New Jersey Facts for Kids. Kiddle Encyclopedia.