In addition to his writing, Williams had a long career as a physician practicing both pediatrics and general medicine. He was affiliated with Passaic General Hospital, where he served as the hospital's chief of pediatrics from 1924 until his death. The hospital, which is now known as St. Mary's General Hospital, paid tribute to Williams with a memorial plaque that states "we walk the wards that Williams walked". 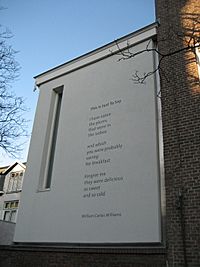 This Is Just To Say
(wall poem in The Hague)

In 1952 Williams was named Consultant in Poetry to the Library of Congress in Washington, DC, but was barred from serving out his term due to McCarthyism and unfounded accusations of Williams's membership in a communist organization. Williams retained legal counsel to refute the charges but was never allowed to respond to his critics and never received an apology from the Library of Congress.

In May 1963, he was posthumously awarded the Pulitzer Prize for Pictures from Brueghel and Other Poems (1962) and the Gold Medal for Poetry of the National Institute of Arts and Letters. The Poetry Society of America continues to honor William Carlos Williams by presenting the prestigious William Carlos Williams Award annually for the best book of poetry published by a small, non-profit or university press.

Williams's house in Rutherford is now on the National Register of Historic Places. He was inducted into the New Jersey Hall of Fame in 2009.

All content from Kiddle encyclopedia articles (including the article images and facts) can be freely used under Attribution-ShareAlike license, unless stated otherwise. Cite this article:
William Carlos Williams Facts for Kids. Kiddle Encyclopedia.