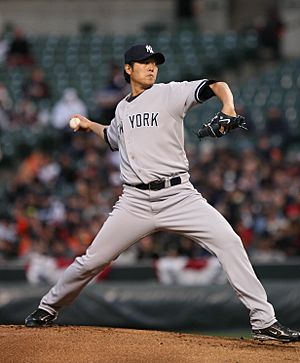 Chien-Ming Wang (born March 31, 1980) is a Taiwanese Major League Baseball player. He plays for the Cincinnati Reds. He is a pitcher. Before he played for the Nationals, Wang played for the New York Yankees. He got 19 wins in the year of 2006 and 2007 and became the first Asian to be the win champion.

However, after his injury in 2008, he started to pitch horribly as he attained an era of 9.64 along with 1 win and 6 losses in the 2009 season. He then got injured again and the New York Yankees did not renew his contract after. He became a free agent.

In 2010, the Washington Nationals signed Wang and helped him recover from his injuries. He did not attend any games in this season.

On March 15, 2012, Wang was once again injured. When he recovered, his starting position has been replaced by Ross Detwiler and he pitched as a relief pitcher and sometimes a starter pitcher. But he still did not do well this season.

All content from Kiddle encyclopedia articles (including the article images and facts) can be freely used under Attribution-ShareAlike license, unless stated otherwise. Cite this article:
Chien-Ming Wang Facts for Kids. Kiddle Encyclopedia.