Fort Lee Historic Park is located atop a bluff of the Hudson Palisades overlooking Burdett's Landing, known as Mount Constitution, in Fort Lee, New Jersey. Native Americans appear to have lived in the area for thousands of years before the arrival of Europeans. Site of George Washington's 1776 encampment opposite Fort Washington at the northern end of Manhattan. Fort Lee is named for General Charles Lee. The site is a reconstruction of the encampment including the blockhouse, battery, quarters as well as a visitors center. It is part of Palisades Interstate Park.

At the north end of the park there are two overlooks with views of the George Washington Bridge, the Hudson River, and the skyline of upper Manhattan. There is metered parking.

Fort Lee, originally Fort Constitution, was an American Revolutionary War fort located on the crest of the Hudson Palisades in what was then Hackensack Township, New Jersey opposite Fort Washington at the northern end of Manhattan Island.

General George Washington issued orders to General Mercer to summon all available troops and erect a fort on the west side of the Hudson River. Construction commenced in July 1776 on the new fort, to be called Fort Constitution. It was located on the western side of the road that led up the hill from the landing. Concurrently, Fort Washington was being built almost directly across the North River (Hudson River) in New York. Chevaux-de-frise, south of the Hudson River Chain, were laid between them.

Defense of the Hudson River 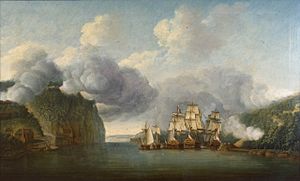 These twin forts were intended to protect the lower Hudson from British warships. At first, efforts were concentrated close to the water level near Burdett's Landing. Later, fortifications were added atop the bluff under the supervision of Joseph Philips, Battalion Commander of the New Jersey State Militia. The Bourdette's ferry service was taken over by the Army, and Peter Bourdette was forced to vacate his house; although as a patriot he considered it no sacrifice and offered the work of his slaves to General Mercer's construction efforts. At the end of September 1776, Fort Constitution was renamed Fort Lee, for General Charles Lee of the Continental Army. George Washington used the stone Bourdette house for his headquarters when he passed time at Fort Lee. At this stage of the war the ferry operated as a supply line and the only link between Forts Lee and Washington.

The Battle of Fort Lee on November 20, 1776 marked the successful invasion of New Jersey by British and Hessian forces and the subsequent general retreat of the Continental Army during the American Revolutionary War.

Peter Bourdette's sixteen-year-old son, also named Peter, provided assistance by direct use of the landing. During the week leading up to the evacuation of Fort Lee he rowed back and forth across the river gathering information for General Washington on the anticipated movements of the British forces. Well after dark on the night before the battle for New York at Fort Washington, George Washington was rowed from Burdett's Landing to the middle of the Hudson River for a strategy session with his senior officers in charge of New York, who rowed to meet him. On November 16, 1776, George Washington witnessed the battle for New York from across the river on the bluff of Fort Lee, above Burdett's Landing.

Fort Lee was rendered defenseless after Continental Army troops holding Fort Washington were defeated and captured on November 16, 1776. The Royal Navy controlled the Hudson River. General William Howe ordered Charles Cornwallis to "clear the rebel troops from New Jersey without a major engagement, and to do it quickly before the weather changed." The force included Hessian units commanded by Colonel Carl von Donop. The invasion of New Jersey began the night of November 19–20, when 5,000 British troops ferried across the Hudson on barges and began landing near New Dock Landing (present-day Alpine). George Washington and Nathanael Greene quickly ordered the evacuation of the fort on the morning of November 20, 1776.

The soldiers then began a hasty retreat west, crossing the Hackensack River at New Bridge Landing and the Passaic River at Acquackanonk Bridge It was during Washington's retreat (beginning along a road which is now Main Street) that Thomas Paine composed his pamphlet, "The American Crisis", which began with the recognized phrase, "These are the times that try men's souls".

Fort Lee Museum is located in Monument Park. which was created by the Daughters of the American Revolution and dedicated in 1908 at ceremony attended by General John "Black Jack" Pershing. The park was part of the original Fort Constitution of the Continental Army under the leadership of General George Washington. Over 2,600 troops were stationed in and around the Monument Park area. In 2004, the park was reconstructed for the Fort Lee Centennial Celebration. A time capsule was placed at the foot of the monument, to be opened at the Bicentennial Celebration in the year 2104. Monument Park and Continental Army Plaza in Williamsburg, Brooklyn are the only parks in the United States dedicated to the soldiers of the American Revolution.

All content from Kiddle encyclopedia articles (including the article images and facts) can be freely used under Attribution-ShareAlike license, unless stated otherwise. Cite this article:
Fort Lee Historic Park Facts for Kids. Kiddle Encyclopedia.