General of the Armies John Joseph "Black Jack" Pershing (September 13, 1860 – July 15, 1948), was a general officer in the United States Army. He led the American Expeditionary Forces in World War I. Pershing is the only person to be promoted in his own lifetime to the highest rank ever held in the United States Army. The rank is known as General of the Armies. (a retroactive Congressional edict passed in 1976 promoted George Washington to the same rank but with higher seniority). Pershing holds the first United States officer service number (O-1). He was regarded as a mentor by the generation of American generals who led the United States Army in Europe during World War II. These include George C. Marshall, Dwight D. Eisenhower, Omar N. Bradley, and George S. Patton. 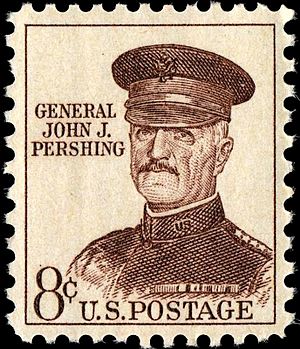 General Pershing was honored with a U.S. postage stamp in 1961

All content from Kiddle encyclopedia articles (including the article images and facts) can be freely used under Attribution-ShareAlike license, unless stated otherwise. Cite this article:
John J. Pershing Facts for Kids. Kiddle Encyclopedia.