Hunter Liggett (March 21, 1857 – December 30, 1935) was a senior United States Army officer. His 42 years of service spanned the period from the Indian campaigns to trench warfare of World War I. Additionally, he identified possible invasion sites in Luzon, particularly Lingayen Gulf, which were used during World War II in 1941 by the Japanese and in 1945 by the United States.

Liggett was born on March 21, 1857 in Reading, Pennsylvania. After his graduation from United States Military Academy at West Point, New York as a second lieutenant in 1879, he was assigned to the 5th Infantry, where he served in both the Montana and Dakota territories, as well as Texas and Florida, during which time he reached the rank of captain.

Liggett's field service in the American west, the Spanish–American War, and the Philippine–American War honed his skills as a military leader. In 1907, he assumed command of a battalion of the 13th Infantry Regiment at Fort Leavenworth, Kansas. From 1909 to 1914, he served as student, faculty member, and president at the Army War College, receiving a promotion to brigadier general in February 1913.

Liggett's services in the Philippines included setting up a staff ride in 1914 to study possible invasion sites on Luzon. He was assisted in this by his aide de camp, Captain George Marshall. The staff ride established that the most likely invasion route would be through the Lingayen Gulf and that this would be all but unstoppable unless the US dramatically increased its army and navy forces in the Philippines. In 1941, the Japanese invaded through the Lingayen Gulf, as the United States did in turn in 1945.

Success in brigade commands in Texas and in the Philippines led to his promotion to major general, and selection as commander of the 41st Division in April 1917. The division served in France as part of the American Expeditionary Force. When his division was disestablished, he took command of I Corps.

Under Liggett's leadership, the I Corps participated in the Second Battle of the Marne and in the reduction of the Saint-Mihiel salient. In October 1918, as commander of the First United States Army with the rank of lieutenant general in the national army, he directed the final phases of the Meuse-Argonne offensive and the pursuit of German forces until the armistice. After commanding the post-war Army of Occupation, Liggett returned to his permanent rank of major general, and retired in 1921.

Liggett wrote about his war time experiences in A.E.F.: Ten Years Ago in France (1928). In 1930, Congress passed a law permitting World War I generals officers to retire at the highest rank they had held, and Liggett was promoted to lieutenant general on the retired list. He died December 30, 1935 in San Francisco, California and is interred at the San Francisco National Cemetery. His grave can be found in the officers section 3, plot 1. 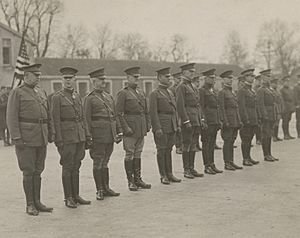 Hunter Liggett (1st on the left) with fellow US generals (left to right) Robert Bullard, James McAndrew, James Harbord, Charles Summerall, John Hines, Edward Lewis, Michael Lenihan, William Mitchell and Frank Parker, after having been decorated with the "Commandeur" of the Légion d'honneur by Marshal Philippe Pétain in 1919.

In his honor, the United States Army named a base on California's central coast, Fort Hunter Liggett.

The USS Hunter Liggett was a passenger ship that was transferred to the Army and renamed Hunter Liggett in February 1939. The ship transported personnel and supplies until May 27, 1941, when she was turned over to the Navy. Converted to Navy use at Brooklyn Navy Yard, she re-commissioned as AP-27 June 9, 1941, and then again reclassified APA-14 February 1, 1943 for the United States Coast Guard.

All content from Kiddle encyclopedia articles (including the article images and facts) can be freely used under Attribution-ShareAlike license, unless stated otherwise. Cite this article:
Hunter Liggett Facts for Kids. Kiddle Encyclopedia.