Fort Hunter Liggett (US Army Garrison, Fort Hunter Liggett (USAG, FHL)), named after General Hunter Liggett in 1941, is a United States Army fort in southern Monterey County, California, about 250 miles (400 km) north of Los Angeles and 150 miles (240 km) south of San Francisco. The fort is primarily used as a training facility, where activities such as field maneuvers and live fire exercises are performed. It is roughly 25 miles northwest of Camp Roberts, California.

The Salinas Valley is the fort's northern border, the Santa Lucia Mountains bound it on the east, Los Padres National Forest on the west and the Monterey and San Luis Obispo County line on the south. The fort originally comprised 200,000 acres (81,000 ha), but even at its present size of 167,000 acres (68,000 ha), it is the largest United States Army Reserve command post.

Some of the land, 52 acres (21 ha), was given to Mission San Antonio de Padua, bringing its size to 85 acres (34 ha). Additionally, land has been traded between the United States Forest Service, which owns the adjacent Los Padres National Forest, and the Army. Junipero Serra Peak or Pimkolam (Native American name), formerly called Santa Lucia Peak, is to the north and Bald Mountain to the south. The fort also contains the headwaters of the Nacimiento River and San Antonio River. The opening helicopter scene of We Were Soldiers was filmed at the old Bailey Bridge spanning the San Antonio.

There is an historic hotel on the Post known as The Hacienda (Milpitas Ranchhouse) which serves the general public and can be used as guest housing by military personnel, and as available, to the public. The "west wing" of The Hacienda has also served as the Installation Commander's Quarters during various periods. A short distance past the old main gate, there is a road to the southwest which goes to what is known as the "Primitive Campgrounds". There are some camper trailers there, and some water spigots around the site. There is also a central restroom on the site and a store. Near that area is a lot that has several used FEMA trailers stored.

Under the Köppen Climate Classification, "dry-summer subtropical" climates are often referred to as "Mediterranean". This climate zone has an average temperature above 10 °C (50 °F) in their warmest months, and an average in the coldest between 18 and -3 °C (64 to 27 °F). Summers tend to be dry with less than one-third that of the wettest winter month, and with less than 30mm (1.18 in) of precipitation in a summer month

There are only 250 permanent civil and military residents at the fort. However, the population can swell up to 4,000 when a rotation of personnel comes for training. 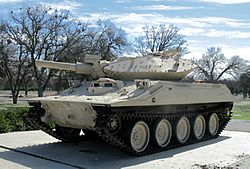 Land for the fort was purchased in 1940 from William Randolph Hearst (Hearst Castle is down the coast), and from adjacent landowners. This surrounded the small unincorporated town of Jolon, which remains today in a significantly diminished form from its heyday.

Fort Hunter Liggett was under the authority of Camp Roberts, California, to the southeast, until 1952, when it became a sub-installation of Fort Ord on the Monterey Peninsula. From the 1970s through the early 1990s, the base served two purposes: as a training area for the 7th Light Infantry Division (based at Fort Ord), and as the home for the USACDEC (usually abbreviated as CDEC and later as TEC, the Training and Experimentation Command). The mission of CDEC was to evaluate new Army and Marine Corps weapons systems by providing a simulated Soviet Mechanized Rifle Company to act as the "OPFOR", or opposing forces. By this method, the Sergeant York Air Defense Gun was found to have serious flaws, while the Marine's LAV vehicle was validated. In 1993, in preparation of the closure of Fort Ord due to BRAC 1991, Hunter Liggett was transferred to the Army Reserves, which in turn made it a sub-installation of Fort McCoy, Wisconsin in 1995.

In its 2005 Base Realignment and Closure (BRAC) recommendations, the Department of Defense recommended relocating the 91st Division from Parks Reserve Forces Training Area to Hunter Liggett. In 2007, the Army created the Combat Support Training Center at Fort Hunter Liggett and ramped up training from roughly 300,000 man-days per year (predominately during the summer), to over 850,000 per year, year-round. While training was centered around Army Reserve units preparing for deployment, such was provided to all Army components (Active, Reserve, and Guard), and to Air Force, Navy, Marines, and even foreign commands (the Japanese Ground Defense Force trained there in late 2007.) Exercises held that first year included Pacific Warrior and Global Medic, which involved over 6,000 troops at Hunter Liggett, and connections to other units in locations across the nation. The Army Installation's Garrison Commander relocated from Camp Parks to Hunter Liggett in early 2007, with oversight for Camp Parks and Army units and housing that remain at former NAS Moffett Field and B.T. Collins Reserve Center in Sacramento. Significant training infrastructure improvements were made including several Tactical Training Bases (TTBs - analogous to Forward Operating Bases), a wired "shoot-house", improvements to the hardened landing strip capable of handling larger Air Force transport planes, and a 7-mile live-fire convoy course, the US Army's only such training area capable of handing 360-degree fire up to .50 caliber. A new US Army Reserve Center was constructed and the 91st Division moved into their new Headquarters building in May 2009. On 11 September 2010 the new HQ was designated as the Master Sergeant Robb G. Needham Army Reserve Center after the first 91st Division combat casualty since WWII.

In 2002 a small portion of Fort Hunter Liggett was scorched by a 2000-acre fire started by a U.S. Forest Service employee's personal Jeep. The fire resulted from a "mechanical failure" in the vehicle, and the employee tried to put the fire out before it spread to brush. No injuries were reported but the fire did consume several outbuildings. Following the ramp-up in training in 2007, two fires that year consumed 5,000 acres (an elevated boom struck an electrical wire, sparking the fire) and 2,000 acres (sparks from live fire catching dry vegetation near by).

In 2008, negligent campers left a fire smoldering at a Los Padres National Forest campsite immediately northeast of Hunter Liggett. The ensuing wildfire (subsequently called the "Indians Fire" after the campsite where it originated) consumed over 200,000 acres, 9,000 of which were on the northern end of the military installation. While battling the fire, over 3,000 firefighters from across the nation based at Ft. Hunter Liggett near one of the newly established Tactical Training Bases.

On August 13, 2016, the Chimney Fire started on the south side of Lake Nacimiento and burned northward onto the base. By the time the fire was contained, over 46,000 acres were burned. Several thousand on the south west part of the base.

All content from Kiddle encyclopedia articles (including the article images and facts) can be freely used under Attribution-ShareAlike license, unless stated otherwise. Cite this article:
Fort Hunter Liggett Facts for Kids. Kiddle Encyclopedia.