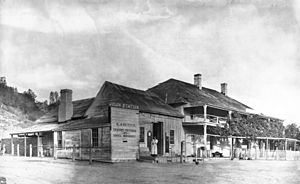 Jolon is an unincorporated community in Monterey County, California, United States. It is located 17 miles (27 km) south of King City, at an elevation of 971 feet (296 m). Jolon is located in the San Antonio River valley, west of Salinas Valley. It is in a rural area, approximately six miles from Mission San Antonio de Padua, and is part of Fort Hunter Liggett.

The town was founded by Antonio Ramirez, who built an inn at the place in 1850. The Jolon post office was founded in 1872. Jolon was owned by William Randolph Hearst in the 1920s, who sold it to the US Army, its current owner. The ZIP Code is 93928, and the community is inside area code 831.

Jolon is mentioned in the chorus of the song "South Coast" [1], as a place you could gamble back in its frontier days.

Jolon is also the setting for John Steinbeck's novel To a God Unknown. The town is not mentioned in the book but is the basis for the fictional town in the book.

In the early 1920s William Randolph Hearst bought up thousands of acres in the rolling foothills of the Santa Lucia mountains east of Hearst Castle near San Simeon on California's Central Coast. He sent his architect, Julia Morgan, to the eastern side of the range, near Mission San Antonio, to design and oversee the building of a hacienda-style headquarters for the expansion of his ranching operation. The building was called the Milpitas Ranchhouse, or simply the Hacienda.

That building, along with some 176,000 acres of land was sold to the U.S. Army in 1942, and became headquarters for its wartime training on what became Fort Hunter Liggett. Known today as "The Hacienda" it is located within the boundaries of Fort Hunter Liggett, near the old town of Jolon, and is open to the public. It is popular with history buffs who relish the relatively unchanged landscape in which it and the nearby Mission San Antonio de Padua are located.

This region experiences warm (but not hot) and dry summers, with no average monthly temperatures above 71.6 °F. In the Summe rit gets to 120 on average 110. According to the Köppen Climate Classification system, Jolon has a warm-summer Mediterranean climate, abbreviated "Csb" on climate maps.

All content from Kiddle encyclopedia articles (including the article images and facts) can be freely used under Attribution-ShareAlike license, unless stated otherwise. Cite this article:
Jolon, California Facts for Kids. Kiddle Encyclopedia.