Kids Encyclopedia Facts
For those of a similar name, see Frank Warren.

Francis Emroy Warren (June 20, 1844 – November 24, 1929) was an American politician of the Republican Party best known for his years in the United States Senate representing Wyoming and being the first Governor of Wyoming. A soldier in the Union Army during the American Civil War, he was the last veteran of that conflict to serve in the U.S. Senate.

Warren was born on June 20, 1844 in Hinsdale, Berkshire County, Massachusetts, the son of Cynthia Estella (Abbott) and Joseph Spencer Warren. He grew up attending common schools and his local Hinsdale Academy.

During the civil war, Warren served in the 49th Massachusetts Infantry as a noncommissioned officer. At the age of nineteen at the siege of Port Hudson, Warren received the Medal of Honor for battlefield gallantry. His entire platoon was destroyed by Confederate bombardment and Warren, taking a serious scalp wound, disabled the artillery. Warren later served as a captain in the Massachusetts Militia. 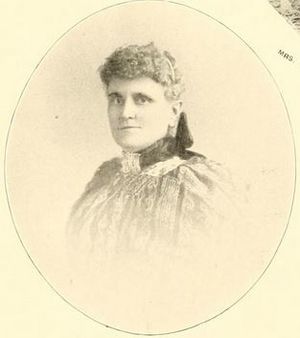 Francis E. Warren married Helen Smith, a woman from Massachusetts, although all of their married life until his first election to the United States Senate, in 1890, was spent in Wyoming. They had two children, a daughter, Helen Frances, and a son, Frederick Emory. Helen Warren was the wife of General John J. Pershing. Mrs. Warren was the president of church, literary and charitable societies of Cheyenne, vice-president of the Foundling Hospital, and Daughter of the American Revolution.

Following the civil war, Warren engaged in farming and stock-raising in Massachusetts before moving to Wyoming (then part of the Territory of Dakota) in 1868. Settling in Cheyenne, Warren engaged in real estate, mercantile business, livestock raising and the establishment of Cheyenne's first lighting system, becoming quite wealthy.

In February 1885, Warren was appointed Governor of the Territory of Wyoming by President Chester A. Arthur, although he was removed by Democratic President Grover Cleveland in November 1886. He was reappointed by President Benjamin Harrison in April 1889, and served until 1890, when he was elected first Governor of Wyoming (October 11, 1890 – November 24, 1890).

In November 1890, Warren resigned as governor, having been elected to the United States Senate as a Republican, serving until March 4, 1893. He then resumed his former business pursuits before returning to the Senate (March 4, 1895–November 24, 1929). Warren chaired the following Senate Committees:

Warren died on November 24, 1929 in Washington, D.C. His funeral service was held in the United States Senate chamber. At the time of his death, he had served longer than any other U.S. senator.

F. E. Warren Air Force Base in Cheyenne, Wyoming is named after Warren. Additionally, Warren's daughter married then-Captain John J. Pershing in 1905. Several years later, President Theodore Roosevelt promoted Pershing from captain to brigadier general over 900 senior officers. Pershing's wife and three daughters were later killed during a fire at the Presidio in San Francisco. Warren was also the first senator to hire a female staffer and, as appropriations chairman during World War I, he was instrumental in funding the American efforts. Warren and his second wife, Clara LaBarron Morgan, bought the Nagle Warren Mansion in April 1910, and their dining room hosted people such as presidents Teddy Roosevelt and William Howard Taft. This mansion is now listed on the National Register of Historic Places. In 1958, he was inducted into the Hall of Great Westerners of the National Cowboy & Western Heritage Museum.

All content from Kiddle encyclopedia articles (including the article images and facts) can be freely used under Attribution-ShareAlike license, unless stated otherwise. Cite this article:
Francis E. Warren Facts for Kids. Kiddle Encyclopedia.