Hinsdale is a town in Berkshire County, Massachusetts, United States. It is part of the Pittsfield, Massachusetts Metropolitan Statistical Area. The population was 2,032 at the 2010 census.

Originally part of Northern Berkshire Township Number 2 and including all of Peru and parts of Middlefield and Dalton, the town was first settled in 1763 and officially incorporated as "Partridgefield" in 1771. Named for Oliver Partridge, one of the three purchasers of the town (along with Governor Francis Bernard), the Western Parish officially broke away from its eastern half and incorporated in 1804, renaming itself for the family of Rev. Theodore Hinsdale, who also owned an important woolen mill. The mill was the center of economic activity in town until the Great Depression, when it closed.

Hinsdale, along with neighboring Dalton, is home to two historic long-distance routes: the Appalachian Trail (a National Scenic Trail) and the Boston and Albany Railroad, on which operates the Lake Shore Limited passenger rail service that has run continuously from Boston to Chicago since 1897. The Hinsdale train depot located in the town center was closed in 1954, and the actual intersection of the two corridors lies at the also decommissioned train depot just north in Dalton.

Hinsdale is located in the Berkshire Hills, with most of its population located in a valley along the East Branch of the Housatonic River, whose origin is just south of the town line. Much of the land around the river south of the town center is part of the Hinsdale Flats Wildlife Management Reserve, and is generally a swampy area. There are four reservoirs within the town (Belmont, Plunkett, Cleveland Brook and a portion of the Windsor Reservoir), as well as part of Muddy Pond in the south and most of Ashmere Lake along the Peru town line. The town, which contains the peak of Tully Mountain along the western border, is traversed by a portion of the Appalachian Trail, which crosses the mountain. The town also has several summer camps and a country club.

Massachusetts Route 8 crosses the town from the south to the Dalton border in the northwest. Route 143 begins at Route 8 at the center of town. The town lies along a CSX Transportation rail line (former New York Central), which brings Amtrak and freight service to Pittsfield. The town lies at the eastern terminus of the Berkshire Regional Transit Authority bus line. Regional bus service can be found in Pittsfield, which is also home to the nearest regional air service (at Pittsfield Municipal Airport). The nearest airport with national flights is Bradley International Airport in Connecticut.

There were 739 households out of which 31.5% had children under the age of 18 living with them, 54.1% were married couples living together, 9.2% had a female householder with no husband present, and 31.0% were non-families. 25.7% of all households were made up of individuals and 7.3% had someone living alone who was 65 years of age or older. The average household size was 2.53 and the average family size was 3.04.

City-stats.org data for Town of Hinsdale, Massachusetts reports 66.5% of the population are registered Democrats, 30.57% Republicans, and 2.9% independents. 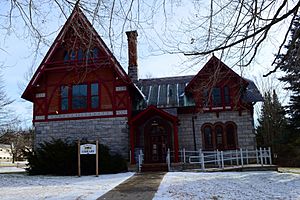 All content from Kiddle encyclopedia articles (including the article images and facts) can be freely used under Attribution-ShareAlike license, unless stated otherwise. Cite this article:
Hinsdale, Massachusetts Facts for Kids. Kiddle Encyclopedia.