Dalton was first settled in 1755 and officially incorporated in 1784. The town was named after Tristram Dalton, the Speaker of the Massachusetts House of Representatives at the time of the town's incorporation.

Dalton was settled as a rural-industrial community, with mills set up along the East Branch of the Housatonic River and small patches of farmland in other areas. In 1801, Zenas Crane, Henry Wiswall and John Willard set up a paper mill along the river which, by 1844, had begun producing banknote paper, which was purchased by banks all the way to Boston. The company, Crane & Co., still is the largest employer in town, making paper products, stationery, and, since 1873, has been the only supplier of paper for the Federal Reserve Note, the United States' paper money. The town now has a mix of small town and suburban qualities, and was served by trolleys to Pittsfield for many years.

In 1973, Dalton was the host of the International Six Days Enduro (ISDE or ISDT). Also referred to as "The Olympics of Motorcycling". The ISDE is an annual event held in a different country each year since 1913 (minus WW-I & WW-II), and draws competitors from all around the world. 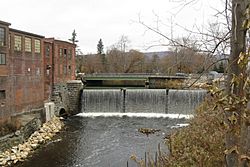 Dalton's center of population, due to its milling history, is around the valley of the East Branch of the Housatonic River. Several brooks run into the river, including Wahconah Falls Brook, whose eponymous waterfalls are a small state park. Much of the rest of town is dominated by the Berkshires, with the north being on a plateau between the peaks of North Mountain and Western Mountain, covered by the Dalton Wildlife Management Area. The south is dominated by Tully Mountain, whose peak is just over the Hinsdale line. The Appalachian Trail winds through town, passing between Tully and North Mountains through the downtown area.

Dalton lies at the junction of Massachusetts Route 8, Route 8A and Route 9, with the latter two running concurrently. Route 9 is the major central east-west route through the state, and ends in neighboring Pittsfield. Dalton's nearest interstate is Interstate 90, the Massachusetts Turnpike, whose nearest exit is 15 miles (24 km) south of town. The town, formerly served by trolley service from Pittsfield, is still on a route of the Berkshire Regional Transit Authority's bus service. The rail line is still active in town, used by CSX Transportation. The nearest regional air service can be found at Pittsfield Municipal Airport, and the nearest national air service can be found at Albany International Airport.

There were 2,712 households out of which 32.2% had children under the age of 18 living with them, 54.5% were married couples living together, 10.9% had a female householder with no husband present, and 31.5% were non-families. 26.9% of all households were made up of individuals and 12.5% had someone living alone who was 65 years of age or older. The average household size was 2.50 and the average family size was 3.04.

The town has churches for several different Christian denominations, including a Congregational church, a Roman Catholic Church, a Methodist Church, an Episcopal church and a Church of the Nazarene.

All content from Kiddle encyclopedia articles (including the article images and facts) can be freely used under Attribution-ShareAlike license, unless stated otherwise. Cite this article:
Dalton, Massachusetts Facts for Kids. Kiddle Encyclopedia.