Windsor is a town in Berkshire County, Massachusetts, United States. It is part of the Pittsfield, Massachusetts Metropolitan Statistical Area. The population was 831 according to the 2020 census.

Windsor was first settled in 1767 and was officially incorporated in 1771. The town was named for Windsor, Connecticut, where many of the settlers emigrated from. Originally, the town was named "Gageborough" in honor of British General Thomas Gage, but was changed due to the general's Revolutionary War affiliation. 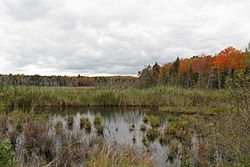 According to the United States Census Bureau, the town has a total area of 35.2 square miles (91.1 km2), of which 35.0 square miles (90.6 km2) is land and 0.15 square miles (0.4 km2), or 0.49%, is water. Windsor is mostly rectangular-shaped, and lies along the eastern border of Berkshire County with Hampshire County. It is bordered by Savoy to the north, Plainfield to the northeast and east, Cummington to the southeast, Peru and Hinsdale to the south, Dalton to the southwest, and Cheshire to the northwest. Windsor is 12 miles (19 km) northeast of Pittsfield, 45 miles (72 km) northwest of Springfield, and 120 miles (190 km) west-northwest of Boston.

Windsor is located on a plateau in the Berkshire Hills, and lies near the source of the Westfield River. The river runs southward through the northeast part of town, flowing through Windsor State Forest. One of the river's feeder brooks flows through the Windsor Jambs, a series of rocky waterfalls. The town is dotted with wildlife management areas, including all of Eugene Moran Wildlife Management Area, as well as portions of the Chalet, Peru and Savoy Wildlife Management Areas.

Windsor is located at the junction of Massachusetts Route 9 and Route 8A, with the two running concurrently west from the junction. Near the northeast corner of town, Route 8A grazes the border (at which point it is combined with Route 116), with a small neighborhood lying around Windsor Pond. 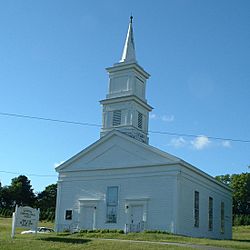 There were 328 households, out of which 35.1% had children under the age of 18 living with them, 67.7% were married couples living together, 5.5% had a female householder with no husband present, and 24.1% were non-families. 19.2% of all households were made up of individuals, and 7.6% had someone living alone who was 65 years of age or older. The average household size was 2.67 and the average family size was 3.05.

Windsor is a member town of the Central Berkshire Regional School District. Elementary school students attend Craneville Elementary School in Dalton. (The Berkshire Trail Elementary School in Cummington, which served both towns for more than 20 years, stopped operating as a public school with the close of the academic year during June 2015.) All students in the district attend the Nessacus Regional Middle School for the middle grades, and Wahconah Regional High School for the upper grades. Both schools are located in Dalton. The nearest parochial school is in Dalton, and the nearest private schools are in Pittsfield.

All content from Kiddle encyclopedia articles (including the article images and facts) can be freely used under Attribution-ShareAlike license, unless stated otherwise. Cite this article:
Windsor, Massachusetts Facts for Kids. Kiddle Encyclopedia.