Cheshire is a town in Berkshire County, Massachusetts, United States. It is part of the Pittsfield, Massachusetts Metropolitan Statistical Area. The population was 3,258 at the 2020 census.

Cheshire was first settled in 1766 and officially incorporated in 1793. It is named after the county of Cheshire in England.

The valley town was founded by Baptists from Rhode Island, the first settlers in the region who were not of the established Puritan Church. The early colonists were mostly descendants of those who had followed Roger Williams to Rhode Island to practice freely. One of the emigration's leaders was Colonel Joab Stafford, who built his house on Stafford Hill and led the men of Cheshire into war during the Revolution. The troops from Cheshire distinguished themselves at the Battle of Bennington in 1777.

Cheshire was incorporated in 1793, and its residents were strongly partisan in the election battles of the country's early days. The Adams–Jefferson election of 1800 was hard fought, and Cheshire was the only Berkshire town that favored Jefferson. When their candidate won the election, the town searched for a way to show their support and pay a tribute to their new president. Because Cheshire, like their namesake, specialized in dairying and making cheese, they decided to send a gift to the president of a Cheshire cheese that used curds from every farmer in town. The resulting cheese was 4 feet (1.2 m) in diameter, 18 inches (460 mm) thick and weighed 1,235 pounds (560 kg). It was moved on a sled drawn by six horses when it was shipped off to Washington, D.C. by water, where it drew a personal letter of thanks from President Jefferson. One of the two monuments in Cheshire commemorates the cheese; the other memorializes the founders of the town. The Pioneer Monument is on Stafford Hill and is a fieldstone replica of Benedict Arnold's Norse Mill in Newport, Rhode Island. The view from the monument is arguably one of the most beautiful views in the Berkshires.

The town had early forges and saw mills, grist mills and tanneries, and in 1812, the Cheshire Crown Glass Company opened, as did a triphammer operation. The town also boasted the first factory in western Massachusetts to manufacture cotton-making machinery.

Cheshire Glass Manufacturing company: Was in business at least in June 1900. The only records to show this are shares of the company in an offering of Capital Stock in the amount of $50,000.00. R V Wood was the company treasurer and signer of the shares which were sold on 16 June 1900.(Wood was well known and respected in town.)

At one time in Cheshire's history, Thomas J. Curtin owned and operated the lime kilns located in the Farnams section of Cheshire. His son, Thomas J. Curtin, Jr., owned and operated a silica sand quarry and mill located on the East side of Hoosac Lake (formerly known as the Cheshire Reservoir). (Thomas, Jr., was very active in town affairs, and served for many years as a selectman, moderator, and town accountant.)

The town's reputation for religious diversity continued, and in 1885 there were only 1,537 people in Cheshire but there were four different churches.

The rural town has been taking on recreational and residential overtones in modern times, with 225 acres (91 ha) of open slopes and wooded trails for skiers on Farnhams. There was in the 1940s a 0.75-mile (1.2 km) straight run at the Cheshire skiing area. In addition, there has been good fishing in the South Branch of the Hoosic River, which originates in Hoosac Lake in the town. 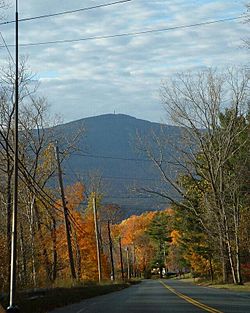 A view of Mount Greylock from the northeast part of town

Cheshire is located within the valley of the Hoosic River, and is the site of a dammed reservoir on the river. To the west, parts of Mount Greylock State Reservation take up sections of town, and includes a section of the auto road. To the southeast, North Mountain peaks just outside town limits before descending to the valley. The Appalachian Trail crosses through the center of town, heading from North Mountain to Mount Greylock. The southern foothills of the Hoosac Range make up much of the eastern side of town, and much of the land is dotted with sections of the Chalet and Stafford Hill Wildlife Management Areas. Several other brooks feed into the river along the way.

Cheshire is bounded by New Ashford to the northwest, Adams to the north, Savoy to the northeast, Windsor to the east, Dalton to the southeast, and Lanesborough to the south and west. Cheshire's town center is located 10.5 miles (16.9 km) northeast of Pittsfield, 53 miles (85 km) northwest of Springfield, and 135 miles (217 km) west-northwest of Boston (although the town is closer to Hartford and Albany than its own state capital).

Massachusetts Route 8 is the main route through town, crossing from south to north. It was once part of New England Interstate Route 8, which led from North Adams to Bridgeport, Connecticut. Route 116 also cuts through the northeast corner of town, and several sections provide panoramic views of Mount Greylock to the west.

The town lies along one of the routes of the Berkshire Regional Transit Authority bus line. Regional service can be found in both North Adams and Pittsfield, as can regional air service. The nearest airport with national service is Albany International Airport.

The town was formerly served by the Pittsfield and North Adams Railroad. Most of the line was converted into the Ashuwillticook Rail Trail an 11-mile (18 km)-long, 10-foot-wide (3.0 m), universally accessible, paved path connecting the Berkshire towns of Lanesborough, Cheshire, and Adams. The trail runs parallel to Route 8 and passes through woods and marshlands, and alongside a lake and a river, with wooded hills and Mount Greylock as a backdrop. The path and has become a popular resource for biking, walking, roller-blading, jogging, etc. The trail passes through the Hoosic River valley, between Mount Greylock and the Hoosac Range. Cheshire Reservoir, the Hoosic River and associated wetland communities flank much of the trail, offering outstanding views and abundant wildlife.

There were 1,367 households, out of which 30.5% had children under the age of 18 living with them, 59.8% were married couples living together, 8.4% had a female householder with no husband present, and 27.9% were non-families. Of all households 23.1% were made up of individuals, and 8.5% had someone living alone who was 65 years of age or older. The average household size was 2.49 and the average family size was 2.92.

Cheshire is joined with Adams to form a regional school district. Cheshire's elementary school is located in Adams at Hoosac Valley Elementary (formally known as C.T. Plunkett). Cheshire Elementary School was closed in 2017 as part of budget cuts in the school district. Both towns previously sent their middle school students to Adams Memorial Middle School in Adams. However, following a government grant to renovate and vastly improve the educational facilities at the district's high school, sixth through twelfth grade is held at Hoosac Valley High School. Private, parochial, charter and vocational schools can be found in Adams and North Adams.

All content from Kiddle encyclopedia articles (including the article images and facts) can be freely used under Attribution-ShareAlike license, unless stated otherwise. Cite this article:
Cheshire, Massachusetts Facts for Kids. Kiddle Encyclopedia.