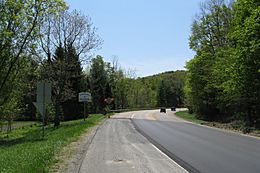 New Ashford is a town in Berkshire County, Massachusetts, United States. It is part of the Pittsfield, Massachusetts Metropolitan Statistical Area. The population was 228 at the 2010 census.

New Ashford was first settled in 1762 and was officially incorporated in 1836. It was named for Ashford, Connecticut, where the founding citizens came from. The town has mostly been a rural farming community, with few mills ever set up in the town. Beginning in 1916, New Ashford had the distinction of casting the first vote in United States Presidential Elections, as Dixville Notch, New Hampshire does today. Accordingly, this small rural town holds an important place in national history. Following the ratifcation of the Nineteenth Amendment the New Ashford poll was where Ms. Phoebe Jordan became the first woman to vote in a national election on November 2, 1920. The old wooden ballot box used on this historic occasion still sits in town hall, and is still in use today.

The town is home to the former Brodie Mountain ski area, a once popular ski resort, begun in 1939 on the Gregory Marakoff (Makaroff) farm.

New Ashford is bordered by Williamstown to the north, Adams to the east, Cheshire to the southeast, Lanesborough to the south, and Hancock to the west. New Ashford is 11 miles (18 km) north of Pittsfield, 57 miles (92 km) northwest of Springfield, and 140 miles (230 km) west-northwest of Boston (although, like much of the Berkshires, it is closer to both Hartford and Albany than its own state capital).

New Ashford sits in a small natural valley within the Taconic Mountains (popularly grouped with the Berkshires). To the east, Mount Greylock State Reservation rises, with the mountain itself peaking just northeast of the town. The peak of Saddle Ball Mountain, a part of the range, lies within the eastern part of town and is the highest point in town, reaching 3,220 feet (980 m) above sea level. The Mount Greylock Scenic Drive crosses through the eastern part of town, on its way to the peak, as does the Appalachian Trail. To the west, Brodie Mountain runs along the western border of town, peaking in neighboring Hancock.

U.S. Route 7 passes through the center of town, and is the main road. No state routes pass through town. There is no rail or bus service; the nearest bus and rail (Amtrak and CSX) service is in Pittsfield. The town is located between two local airports, Harriman and West Airport in North Adams and Pittsfield Municipal Airport. The nearest airport with national service is Albany International Airport.

As of the census of 2000, there were 247 people, 94 households, and 72 families residing in the town. New Ashford is the second least-populated town in Berkshire County, and fourth-smallest town in Massachusetts (ahead of Mount Washington, Monroe and Gosnold). The population density was 18.2 people per square mile (7.0/km²), making it fourth-smallest in the county and ninth-smallest in the Commonwealth by population density. There were 110 housing units at an average density of 8.1 per square mile (3.1/km²). The racial makeup of the town was 95.55% White, 0.81% African American, 3.24% Asian, and 0.40% from two or more races.

There were 94 households out of which 36.2% had children under the age of 18 living with them, 66.0% were married couples living together, 9.6% had a female householder with no husband present, and 23.4% were non-families. 16.0% of all households were made up of individuals and 7.4% had someone living alone who was 65 years of age or older. The average household size was 2.63 and the average family size was 3.00.

All content from Kiddle encyclopedia articles (including the article images and facts) can be freely used under Attribution-ShareAlike license, unless stated otherwise. Cite this article:
New Ashford, Massachusetts Facts for Kids. Kiddle Encyclopedia.