Adams is a town in northern Berkshire County, Massachusetts, United States. It is part of the Pittsfield, Massachusetts Metropolitan Statistical Area. The population was 8,485 at the 2010 census. 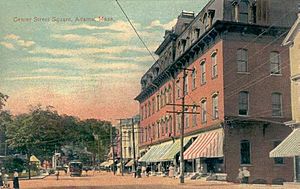 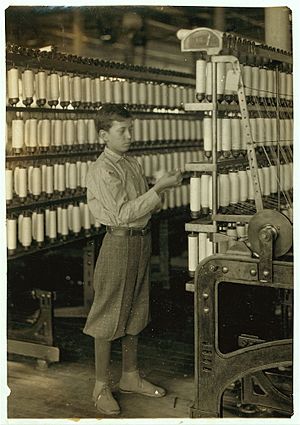 Nathan Jones purchased the township of East Hoosac at auction in 1762 from the state for £3,200. In 1778, the town was officially incorporated as Adams, named in honor of Samuel Adams, a revolutionary leader and signer of the Declaration of Independence. Much of the land had been subdivided into 100-acre (0.40 km2) and 200-acre (0.81 km2) lots. These were mostly farms with frontage on the Hoosic River, which over time would provide water power for woolen, cotton, lumber, and plastic mills.

First settled in 1745, North Adams was originally part of Adams until the town split in 1878. Although there has never been a town of South Adams, the name was used prior to 1878 to specify the southern part of the town that had long had two primary centers, and survives in the name of the South Adams Savings Bank, which was incorporated in 1869.

Early settlers in the 1760s included a group of Quakers, many of whom migrated together from Smithfield, Rhode Island. The Quaker civil rights leader, abolitionist, and suffragist Susan B. Anthony was born in 1820 in Adams, and her family lived there until she was six. They moved west into New York, and later moved again to western New York. Anthony's childhood home has been preserved and is operated today as a museum.

The town's population declined from 1810 to 1820 as farmers moved west for better soil. The War of 1812 had the unintended result of stimulating development of the textile industry in the United States because British textiles were no longer available. In 1814, the Adams South Village Cotton Manufacture Company opened. With the construction of a number of mills on the Hoosic River, the demand for labor increased greatly, and Adams' population more than doubled to 4,000 between 1820 and 1835. Growth in both halves of Adams also was stimulated by the opening of the Hoosac Tunnel in 1875, which connected these areas of the town. In the late 1800s, during the expansion of the cotton mills, four large brick buildings were constructed on Park Street: the P. J. Barrett Block, Jones Block, Armory Block, and the Mausert Block, opposite the Town Hall. They were used for retail stores and offices.

President William McKinley made two visits to the town, the second in 1897 to lay the cornerstone of the Adams Free Library. He was a friend of the Plunkett brothers (founders in 1889 of the Berkshire Cotton Manufacturing Company), and of the textile industry generally. In 1903, the town honored the assassinated president by erecting a larger-than-life statue beside the library.

Berkshire Cotton later became a major part of Berkshire Hathaway; it continued to manufacture high-quality textiles through the mid-20th century. Its large factory in Adams was closed in 1958. Many textile jobs had moved South, as the industry relocated to states with lower wages and weak unions.

The mill town's only major remaining mill, Specialty Minerals, mines and processes limestone for calcium carbonate. This is used in antacids and food supplements, as well as paper whiteners and other industrial purposes.

Since the late 20th century, the town has encouraged historic and destination tourism, part of a broader trend in the Berkshires. It has promoted its natural beauty and outdoor activities, and its proximity to the galleries, museums and colleges of North Adams. 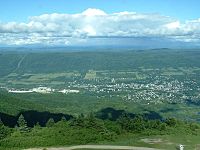 A view of Adams from atop Mount Greylock

According to the United States Census Bureau, the town has a total area of 23.0 square miles (59.5 km2), of which 22.9 square miles (59.3 km2) is land and 0.077 square miles (0.2 km2), or 0.33%, is water. The town lies along the valley surrounding the Hoosic River and its tributary brooks. Set between the Taconic Range to the west and the Hoosac Range of the Berkshires to the east, Adams includes the summit of Mount Greylock, elevation 3,491 feet (1,064 m) above sea level. The mountain, located within the state reservation of the same name, is the highest point in Massachusetts, a waypoint on the Appalachian Trail, and in the 19th-century inspired writers including Herman Melville. The town also includes a corner of Savoy Mountain State Park.

Adams is bordered to the north by North Adams, to the east by Florida and Savoy, to the south by Savoy and Cheshire, and to the west by New Ashford and Williamstown.

Massachusetts Route 8 is the primary north-south road through town, and was originally signed as New England Interstate Route 8, which extended southward to Bridgeport, Connecticut. The town is the northern terminus of Route 116, which extends southeast to Springfield.

Freight rail once ran through the town, but is now mostly converted to the paved Ashuwillticook Rail Trail. The town lies along the northern route of the Berkshire Regional Transit Authority. Regional bus service can be found in North Adams, as can regional air service at Harriman-and-West Airport. The nearest airport with international flights is Albany International Airport in New York. 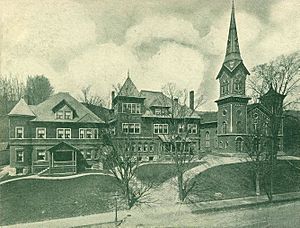 There were 3,992 households out of which 26.9% had children under the age of 18 living with them, 45.0% were married couples living together, 11.9% had a female householder with no husband present, and 39.1% were non-families. 34.8% of all households were made up of individuals and 17.7% had someone living alone who was 65 years of age or older. The average household size was 2.20 and the average family size was 2.81. 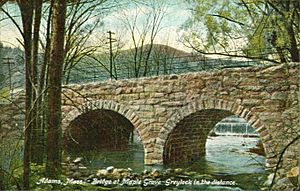 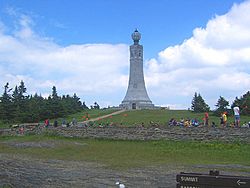 All content from Kiddle encyclopedia articles (including the article images and facts) can be freely used under Attribution-ShareAlike license, unless stated otherwise. Cite this article:
Adams, Massachusetts Facts for Kids. Kiddle Encyclopedia.