Ashford is a town in Windham County, Connecticut, United States. It is part of the Connecticut Quiet Corner. The population was 4,317 at the 2010 census. It was founded in 1714. Eastford was a part of Ashford until 1847, when the former split off to organize its own town. For this reason North Ashford is located in northeast Eastford.

Ashford is home to the largest boy scout camp in Connecticut, the June Norcross Webster Scout Reservation; to Paul Newman's Hole in the Wall Gang Camp for children with cancer and other serious illness; to the Salvation Army CONNRI Lodge and Conference Center; and to the Evangelical Christian Center, a retreat, camp and conference center.

President George Washington, returning from his tour of the country in the fall of 1789, was chagrined to be involuntarily abandoned in the village on a Sunday. It was contrary to law to hire a conveyance on that day, which was observed by villagers, to Washington's great annoyance.

New Ashford in Massachusetts is named after Ashford, as it was settled in 1762 by people from Ashford.

According to the United States Census Bureau, the town has a total area of 39.5 square miles (102 km2), of which, 38.8 square miles (100 km2) of it is land and 0.7 square miles (1.8 km2) of it (1.80%) is water. The Mount Hope River flows through the middle of the town, from north to south, while Bigelow Brook flows along the town's eastern border with Eastford. Ashford has several lakes and ponds, notably Ashford Lake, Lake Chaffee, Knowlton Pond, Rychlings Pond, Halls Pond, Poole Pond, and Morey Pond.

Boston Hollow, a deep ravine, is located in Ashford, in the Yale-Myers Forest. Parts of Natchaug State Forest and Nipmuck State Forest are also located in Ashford, and both the Natchaug Trail and the Nipmuck Trail runs through the town. Joshua's Tract Conservation and Historic Trust has several nature preserved in town. Snow Hill located in the northwest corner of the town, is the highest point in Windham County at 1,210 feet. 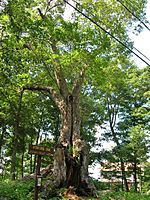 Ashford is located in the northeastern coastal forests, which is a temperate broadleaf and mixed forest ecoregion. Ashford is home to the Yale-Myers Forest, which is used by the Yale School of Forestry & Environmental Studies for scientific research and education. The most famous tree in town is the Ashford Oak, a very large and old Northern Red Oak with a trunk that is 8 meters in circumference.

The last recorded sighting of periodic cicadas belonging to Brood XI of the 17-year variety occurred in Ashford in 1954 along the Fenton River.

There were 1,578 households, out of which 34.5% had children under the age of 18 living with them, 56.5% were married couples living together, 8.5% had a female householder with no husband present, and 31.3% were non-families. 20.6% of all households were made up of individuals, and 6.0% had someone living alone who was 65 years of age or older. The average household size was 2.59 and the average family size was 3.05. 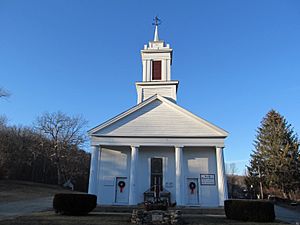 United Baptist Church in the Warrenville section of Ashford

United Baptist Church in the Warrenville section of Ashford

Several churches exist in Ashford. They include the St Philip-Apostle Church (Catholic), United Baptist Church of Ashford, The Church of Jesus Christ of Latter-day Saints, and Westford Congregational Church.

Elementary and middle school-aged residents attend Ashford School, the town's only school, built in 1951 to replace the old Ashford Academy schoolhouse. This school educates students from pre-k through grade eight. In February 1979, the town's board of education considered closing the school in response to a budget crisis.

All content from Kiddle encyclopedia articles (including the article images and facts) can be freely used under Attribution-ShareAlike license, unless stated otherwise. Cite this article:
Ashford, Connecticut Facts for Kids. Kiddle Encyclopedia.