Lanesborough is a town in Berkshire County, Massachusetts, United States. It is part of the Pittsfield, Massachusetts Metropolitan Statistical Area. The population was 3,091 at the 2010 census.

One of the first Berkshire communities to be settled, Lanesborough was originally known as "New Framingham", carved from part of Northern Berkshire Township #6. Lanesborough was first settled in 1753 and was officially incorporated in 1765. It was renamed Lanesborough, for the Countess of Lanesborough, a friend of Governor Francis Bernard, who incorporated the town. The town grew with small industry in the early 19th century, most of which settled along Town Brook. Berkshire Pleasure Park was a major attraction at the turn of the 20th century. It was one of the trolley parks along what is now Route 8 on the eastern side of town.

Today the town includes many small businesses, but has little industry of its own. More people from Lanesborough are employed in nearby communities or at the nearby Berkshire Mall.

The town's most famous resident was Josh Billings, born Henry Wheeler Shaw. He was a popular humorist in the nineteenth century, rivaling Mark Twain for popularity at the time. Historic sites include the Old Stone School, an unusual stone one-room schoolhouse, built in 1832 from funds donated by Ephraim Bradley and which operated as a school until 1950. The building is currently used as a photography gallery and guesthouse. 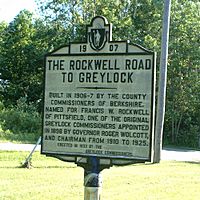 The entrance to Rockwell Road, which extends from Lanesborough to the summit of Mount Greylock in Adams

Lanesborough is bordered by New Ashford to the north, Cheshire to the northeast, Dalton to the east, Pittsfield to the south, and Hancock to the west. The town center is 5 miles (8 km) north of Pittsfield, 50 miles (80 km) northwest of Springfield and 140 miles (230 km) west of Boston.

Lanesborough is situated in two valleys, with Town Brook running south through the central valley into Pontoosuc Lake, and the Cheshire Reservoir, the headwaters of the Hoosic River, running north through the town's smaller, eastern valley. To the north, the beginning of Mount Greylock is located in the town, with the auto road and visitors' center beginning there as well. Rockwell Road, which leads to the Visitors' Center, ascends from Lanesborough through Cheshire to the summit in Adams. Sperry Road, which branches off Rockwell, leads to a campground and picnic area. Pittsfield State Forest also has a large section within town, with Balance Rock being its main attraction. To the west, Jiminy Peak and Sheeps Heaven Mountain, the southern portion of Brodie Mountain, form much of the western border. While much of Jiminy Peak is located in the town of Hancock, recent aerial mapping determined that the summit is indeed in Lanesborough. The ski area's Hendricks Summit Lodge (named after Lanesborough residents Bart and Mary Hendricks) is located within the town. Brodie Mountain Road, which passes between these two mountains, is one of the few roads which lead into neighboring Hancock from the east. The very large Massachusetts Champion Elm stands on Summer Street, visible from Route 7. Lanesborough hosts the southern access to the Ashuwillticook Rail Trail, a bike path converted from a railway path.

U.S. Route 7 is the main route through town, passing from Pittsfield north towards Williamstown and Vermont. This road was once New England Interstate Route 4, which connected Norwalk, Connecticut, with the Canada–US border. To the east, Massachusetts Route 8, which was also a New England Interstate Route, passes through the village of Berkshire towards North Adams. Route 8 lies along a route of the Berkshire Regional Transit Authority bus line. Regional bus and air service can both be found in Pittsfield, with the nearest airport with national flights being Albany International Airport.

There were 1,203 households out of which 32.8% had children under the age of 18 living with them, 56.4% were married couples living together, 9.5% had a female householder with no husband present, and 30.2% were non-families. 23.9% of all households were made up of individuals and 9.1% had someone living alone who was 65 years of age or older. The average household size was 2.48 and the average family size was 2.95.

All content from Kiddle encyclopedia articles (including the article images and facts) can be freely used under Attribution-ShareAlike license, unless stated otherwise. Cite this article:
Lanesborough, Massachusetts Facts for Kids. Kiddle Encyclopedia.