Hancock is a town in Berkshire County, Massachusetts, United States. It is part of the Pittsfield, Massachusetts Metropolitan Statistical Area. The population was 757 at the 2020 census.

Hancock was first settled in 1762 as the Plantation of Jericho. The town was officially incorporated in 1776, and renamed for John Hancock.

Hancock is one of only three towns in Massachusetts whose local telephone service was not provided by the former Bell System (instead it is part of the Taconic Telephone Corporation, every one of whose other exchanges is situated in neighboring New York). The other two such towns are Richmond, also in Berkshire County, and Granby, in Hampshire County. 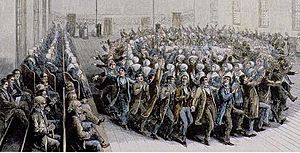 Around 1780, some families in Hancock converted to the teachings of the Shakers. By 1790, Believers in Hancock and Pittsfield established Hancock Shaker Village. The Shakers were a religious order which believed in pacifism, celibacy and communal living. Worship could take the form of singing and ecstatic dance, which is why they were called the "Shaking Quakers", or "Shakers." The utopian sect is renowned today for its plain architecture and furniture. Hancock Shaker Village is famous for its Round Stone Barn, built in 1826. In 1959, the remaining Shakers in Hancock sold the property to a non-profit museum.

Hancock is bordered on the north by Williamstown, on the northeast by New Ashford, on the east by Lanesborough and Pittsfield, on the south by Richmond, and on the west by Canaan, New Lebanon, Stephentown and Berlin, New York.

Most of northern Hancock occupies a valley bound by the Taconic Mountains on each side. The northern half of the valley is drained by the west branch of the Green River, a tributary of the Hoosic River, and the southern half of the valley is drained by the headwaters of Kinderhook Creek, which flows southwest into New York and the Hudson River. To the west, along the New York border, stands the western escarpment of the Taconic Mountains including Misery Mountain and Rounds Mountain, while the northeastern town line is bordered by the eastern Taconic escarpment peaks of Brodie Mountain, Sheeps Heaven Mountain, and Jiminy Peak (home to a ski area of the same name). Southern Hancock, where the Shaker Village is located, is dominated by the Taconic peaks of Pittsfield State Forest, including Tower Mountain, Smith Mountain, Berry Hill, Honwee Mountain, Doll Mountain, and Shaker Mountain. Berry Pond, the highest water body in Massachusetts at over 2,070 feet (630 m) above sea level, sits near the summit of Berry Hill. The highest point in Hancock is a summit of Misery Mountain that reaches 2,671 feet (814 m) above sea level.

U.S. Route 20 passes through the southern end of town, from Pittsfield to the New York state line. Massachusetts Route 43 also passes through town, from the northern border with Williamstown, and is the main route through town, turning along Kinderhook Creek and into New York. There are no roads within the town that connect the two roads, however.

There is no rail, bus or air service within the town. The nearest services are in Pittsfield to the south, and Williamstown and North Adams to the north. The nearest airport with nationally connecting flights is Albany International Airport, approximately 40 miles (64 km) northwest of town.

There were 296 households, out of which 29.7% had children under the age of 18 living with them, 62.2% were married couples living together, 5.4% had a female householder with no husband present, and 29.1% were non-families. 23.3% of all households were made up of individuals, and 7.4% had someone living alone who was 65 years of age or older. The average household size was 2.41 and the average family size was 2.84.

All content from Kiddle encyclopedia articles (including the article images and facts) can be freely used under Attribution-ShareAlike license, unless stated otherwise. Cite this article:
Hancock, Massachusetts Facts for Kids. Kiddle Encyclopedia.