Peru is a town in Berkshire County, Massachusetts, United States. The population was 847 at the 2010 census.

Originally known as Northern Berkshire Township Number 2 and including all of Hinsdale and part of Middlefield, the town was first settled in 1767 and was officially incorporated as Partridgefield in 1771. Originally named for Oliver Partridge, one of the three purchasers of the town (along with Governor Francis Bernard), the name was officially changed to Peru in 1806, on the suggestion of the Rev. John Leland, "because it is like the Peru of South America, a mountain town, and if no gold or silver mines are under her rocks, she favors hard money and begins with a P."

Peru has the highest mean altitude in Massachusetts and, along with neighboring Windsor, is one of only two municipalities with a mean elevation above 2,000 feet. It lies on high ground in the Berkshire Hills, with three main peaks in the town. Much of Peru is forested, with a large portion of the northern third of town covered by a wildlife management area, and much of the southern third covered by the Peru and Middlefield State Forests. To the west of town, Ashmere Lake flows out into Bennett Brook, eventually reaching the East Branch of the Housatonic River. To the east, many brooks, including Trout Brook, flow south and east towards the Westfield River, part of the Connecticut River watershed (Trout Brook is actually one of the main sources of the river).

Peru is bisected by Massachusetts Route 143, passing from east to west. No other state roads pass through the town. The nearest interstate, Interstate 90 (the Massachusetts Turnpike), can be accessed approximately 20 miles (32 km) away in Lee. The nearest bus stop is in the center of Hinsdale. The nearest coach and rail services can be found in Pittsfield, as can the closest regional airport (at Pittsfield Municipal Airport). The nearest national service is located at Bradley International Airport in Windsor Locks, Connecticut. 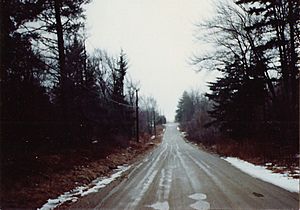 There were 295 households out of which 38.0% had children under the age of 18 living with them, 64.7% were married couples living together, 7.5% had a female householder with no husband present, and 22.7% were non-families. 16.3% of all households were made up of individuals and 5.1% had someone living alone who was 65 years of age or older. The average household size was 2.78 and the average family size was 3.14.

All content from Kiddle encyclopedia articles (including the article images and facts) can be freely used under Attribution-ShareAlike license, unless stated otherwise. Cite this article:
Peru, Massachusetts Facts for Kids. Kiddle Encyclopedia.