Lee occupies land which was originally territory of Mahican Indians. The first non-native settlement in the area was known as Dodgetown as early as 1760. Dodgetown was named after its founding settler, Asahel Dodge, who immigrated to the area from Cape Cod. Lee was incorporated in 1777 from parts of Great Barrington and Washington. It is named after Revolutionary War General Charles Lee. Lee is a former mill town.

In the autumn of 1786 during Shays' Rebellion, about 250 followers of Daniel Shays encountered state troops commanded by General John Paterson near East Lee. The Shaysites paraded a fake cannon crafted from a yarn beam, and the troops fled.

Early industries included agriculture, lumbering, and lime making. Abundant streams and rivers provided water power for mills which produced textiles and wire. In 1806, papermaking became the principal industry with the construction of the Willow Mill by Samuel Church in South Lee. In 1827, the Columbia Mill in central Lee was established, and would eventually be the first to supply 100% groundwood newsprint to The New York Times. By 1857, there were 25 paper mills in Lee. The Smith Paper Company discovered how to manufacture paper solely from wood pulp in 1867, and through the 1870s was the largest producer of paper in the country. The mills previously owned by Smith Paper Company were closed in 2008. Today, Lee has only a single papermaking facility.

The town's marble is famous for its quality. The first quarry was established in 1852. In 1867, almost 500,000 cubic feet (14,000 m3) of marble was excavated and shipped on the Housatonic Railroad. Buildings constructed of Lee marble include a wing of the Capitol in Washington and St. Patrick's Cathedral in New York City.

The town's 19th century prosperity is still evident in its architecture, including its town hall, library, several churches and private homes. South Lee includes a historic district listed on the National Register.

Lee has become a popular tourist destination, noted both for its New England charm and its bed and breakfast establishments. It is known as the "Gateway to The Berkshires" because it provides one of only two exits on the Massachusetts Turnpike which serve the county, and the only one going eastbound.

Arlo Guthrie's court appearance before the blind judge and his seeing-eye dog for dumping garbage as noted in the song "Alice's Restaurant" took place in the courtroom at the Lee town Hall pictured above. 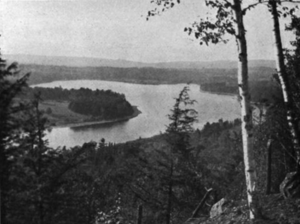 Lee is located in the southern section of the Berkshires, in a valley along the Housatonic River. The town lies to the west of October Mountain State Forest, with two sections of the forest in Lee. In the southwest corner of town lies a portion of Beartown State Forest, where Burgoyne Pass crosses the northern end of the mountain. Hop Brook, a marshy brook which flows from Tyringham, flows into the Housatonic in the south, and other bodies of water include Laurel Lake to the north, and Goose Pond to the southeast. The Appalachian Trail skirts the eastern part of the town, passing through Tyringham, Becket and Washington.

Lee is located along Interstate 90 (the Massachusetts Turnpike), and is home to Exit 2, the westernmost full exit on the turnpike (Exit 1, in West Stockbridge, is only a turnaround exit) as well as the first service area along the Pike. Lee lies along U.S. Route 20, the "old Mass Pike", which was the main route to New York state prior to the interstate. A small section of U.S. Route 7 crosses through the northwest corner of town before meeting Route 20 in Lenox. Massachusetts Route 102's eastern terminus is located at Route 20 at the Exit 2 toll plaza. 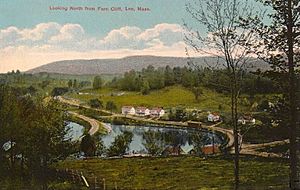 Lee lies along the Housatonic Railroad line, which travels from Pittsfield, through Lee to Great Barrington and Sheffield, terminating near at New Milford, Connecticut, near Danbury. The line is still the area's primary rail link to New York City's metropolitan area, to Boston, and to Albany. Currently (2013) there are negotiations of restoring rail commuter service between the Berkshires and New York City along this route. The town is covered by the Berkshire Regional Transit Authority (BRTA) bus line, which travels between Pittsfield and Great Barrington. Regional bus services make regularly daily stops, and maintain year round schedules through Lee. Peter Pan and Bonanza Bus Lines each make scheduled stops at town hall, downtown.

There were 2,492 households out of which 28.6% had children under the age of 18 living with them, 51.7% were married couples living together, 10.2% had a female householder with no husband present, and 34.2% were non-families. 28.2% of all households were made up of individuals and 12.6% had someone living alone who was 65 years of age or older. The average household size was 2.39 and the average family size was 2.91.

All content from Kiddle encyclopedia articles (including the article images and facts) can be freely used under Attribution-ShareAlike license, unless stated otherwise. Cite this article:
Lee, Massachusetts Facts for Kids. Kiddle Encyclopedia.