Tyringham is a town in Berkshire County, Massachusetts, United States. It is part of the Pittsfield, Massachusetts Metropolitan Statistical Area. The population was 327 at the 2010 census.

Founded as Housatonic Township Number 1, the land which became Tyringham and Monterey was first settled in 1735. The two main villages were set up along two waterways, Hop Brook to the north and the Konkapot River to the south. In 1750, Adonijah Bidwell, a Yale Divinity School graduate from the Hartford region, became the first minister of Township No. 1. When a meetinghouse was founded in the south, it led to a buildup in the north, and by 1767 the town was incorporated and named for Tyringham, a village in Buckinghamshire, England. The town was home to the Tyringham Shaker Settlement Historic District, with the Shaker holy name of "Jerusalem", which lay just south of the town center. The town of Monterey was set off and incorporated as its own town in 1847. The town was the site of several small country estates for the wealthy, most of which are long gone, leaving Tyringham as a small, rural community. 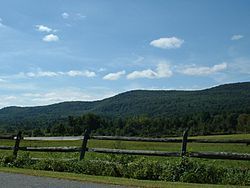 The hills to the south of Tyringham, as seen from Main Road

Tyringham is located in the Hop Brook Valley in the Berkshire Hills. To the northeast of the valley, Baldy Mountain rises to a large plateau which stretches into the neighboring towns, and includes Goose Pond. To the southwest of the valley, two mountain peaks - Mount Wilcot and Hunger Mountain - rise in a plateau in neighboring Monterey. The Appalachian Trail passes through the town, winding down Sky Hill (a part of Mount Wilcot), then sweeps through the valley and over Baldy Mountain and towards Becket Mountain.

Tyringham is one of just fifteen towns in Massachusetts (and only two, along with Mount Washington, in Berkshire County) which is not served by any state routes of any type. Interstate 90 (the Massachusetts Turnpike) and U.S. Route 20 pass just north of the town's northeast corner, and Massachusetts Route 23 passes through neighboring Monterey to the south. The main road through town (named "Main Road") passes between this route to the south and Route 102 in Lee, just south of the point where it meets Route 20 at I-90 Exit 2. There are no rail or bus services in the town, with the nearest regional service for both being in Great Barrington. The nearest national air service can be reached at Bradley International Airport in Connecticut.

There were 133 households out of which 24.1% had children under the age of 18 living with them, 66.2% were married couples living together, 6.0% had a female householder with no husband present, and 25.6% were non-families. 20.3% of all households were made up of individuals and 9.0% had someone living alone who was 65 years of age or older. The average household size was 2.56 and the average family size was 2.93.

All content from Kiddle encyclopedia articles (including the article images and facts) can be freely used under Attribution-ShareAlike license, unless stated otherwise. Cite this article:
Tyringham, Massachusetts Facts for Kids. Kiddle Encyclopedia.