Monterey is a town in Berkshire County, Massachusetts, United States. It is part of the Pittsfield, Massachusetts Metropolitan Statistical Area. The population was 1,095 at the 2020 census. 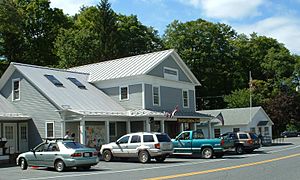 Monterey General Store, with the post office to the right

Prior to official settlement, the area of Monterey was inhabited by Mahicans, the local Native American tribe. Monterey was first settled by colonists in 1739 as a part of Housatonic Township Number One. The township had two villages, along Hop Brook to the north (modern Tyringham) and Konkapot River in the south (modern Monterey). The town was officially incorporated as Tyringham in 1767. In the earliest days of 1776, General Henry Knox passed through the town, bringing cannons from Fort Ticonderoga in New York to aid in ending the Siege of Boston. Today, the path he took is known as the Henry Knox Trail. However, the long divide between the two towns led to their separation in 1847. Previously called Green Woods or South Tyringham, the local people voted to name the new town Monterey to commemorate the Battle of Monterey that took place a year earlier in the Mexican–American War. Palo Alto and Buena Vista were also considered, but thought to be "too foreign sounding". The town was mostly known for its sawmills, but today it is a rural community, known more for its recreational areas in the state forests and along Lake Garfield.

Monterey lies in the southern end of the Berkshires, at the headwaters of the Konkapot River. The river rises from Lake Garfield, which is surrounded by several hills, and Lake Buel, which lies along the New Marlborough town line. Much of the northwest corner of town is dominated by Mount Wilcox and the lower portion of Beartown State Forest. The state forest is crossed by the Appalachian Trail, which crosses from Great Barrington, below the peak of the mountain and on to Sky Hill in Tyringham.

Monterey lies along Massachusetts Route 23, the main east-west route through town. Near the Great Barrington line, Route 57 begins and heads eastward, passing Lake Buel before heading into New Marlborough. Route 57 also carries Route 183, which is combined with Route 23 west of the junction, southward towards Connecticut. There are also several non-state highways which connect the town to its other neighbors. Most of the population is centered around Route 23, especially near Lake Garfield.

The nearest interstate, Interstate 90 (the Massachusetts Turnpike), passes through neighboring Otis, and its nearest exit is at U.S. Route 20 in Lee. The nearest regional rail and bus service is at Great Barrington, which is at the end of a weekend service line to New York City via the MTA rail line (note: this refers to a discontinued connecting bus service to GB from the MTA's Wassaic, NY station). Amtrak service can also be found in Pittsfield, along the east-west Lake Shore Limited. There is a small regional airport in Great Barrington, with the nearest national air service at Bradley International Airport in Windsor Locks, Connecticut.

There were 387 households, out of which 23.8% had children under the age of 18 living with them, 51.9% were married couples living together, 8.0% had a female householder with no husband present, and 38.0% were non-families. 27.9% of all households were made up of individuals, and 8.5% had someone living alone who was 65 years of age or older. The average household size was 2.21 and the average family size was 2.74. 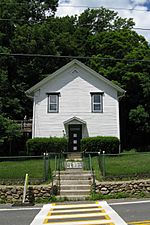 Monterey is one of five towns that operate the Southern Berkshire Regional School District (a sixth town, Mount Washington, also sends students to the district's schools). The town's school, Monterey School, operates solely for kindergarten students. Students attend the New Marlborough Central School from first through fourth grades, while all students in the district attend Undermountain Elementary School in Sheffield for fifth and sixth grades, and Mount Everett Regional School in Sheffield for grades 7-12. There are private schools in Great Barrington and other nearby towns.

All content from Kiddle encyclopedia articles (including the article images and facts) can be freely used under Attribution-ShareAlike license, unless stated otherwise. Cite this article:
Monterey, Massachusetts Facts for Kids. Kiddle Encyclopedia.