Egremont is a town in Berkshire County, Massachusetts, United States. It is part of the Pittsfield, Massachusetts Metropolitan Statistical Area. The population was 1,225 at the 2010 census. Egremont consists of two villages, North Egremont and South Egremont.

Egremont was first settled in 1722 by Dutch settlers from New York. English settlers arrived a few years later, and the town was officially incorporated by Massachusetts in 1761. It is unclear whether the town is named for the English town or for the first Earl of Egremont, whose title was created shortly after Egremont's settlement. For much of its history, Egremont has been an agricultural town, with only a small milling area around South Egremont.

Around New Year's Day, 1776, General Henry Knox passed through the town with cannons from Fort Ticonderoga, which he was bringing to help end the Siege of Boston. Today, the path is known as the Knox Trail, and a historical marker is located in the village of North Egremont. 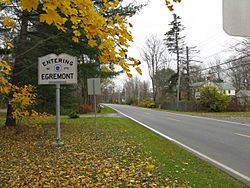 According to the United States Census Bureau, the town has a total area of 18.9 square miles (49.0 km2), of which 18.7 square miles (48.4 km2) is land and 0.23 square miles (0.6 km2), or 1.26%, is water. Egremont lies along the western border of Berkshire County and Massachusetts, with Columbia County, New York, to the west. The town is bordered by Alford to the north, Great Barrington to the east, Sheffield to the southeast, Mount Washington to the southwest, and Copake and Hillsdale, New York, to the west. Egremont is 23 miles (37 km) south-southwest of Pittsfield, 50 miles (80 km) west of Springfield, 140 miles (230 km) west of Boston, and 48 miles (77 km) southeast of Albany, New York.

Egremont is situated in a valley east of the Taconic Range. To the southwest, Mount Whitbeck divides the town from Mount Washington, and to the west, Mount Fray and several other mountains divide the town from New York proper. Mount Fray is the site of the Catamount Ski Area, which extends into Hillsdale. Mount Whitbeck and its neighbor, the Jug End, make up the Jug End State Reservation and Wildlife Management Area. The Appalachian Trail extends through the reservation, before turning east at the Jug End towards Great Barrington. The town lies along the Green River, a tributary of the Housatonic River. Several brooks also flow through the town, with one being dammed to form the Mill Pond in South Egremont.

There were 609 households out of which 22.8% had children under the age of 18 living with them, 54.0% were married couples living together, 10.0% had a female householder with no husband present, and 33.0% were non-families. 27.6% of all households were made up of individuals and 11.2% had someone living alone who was 65 years of age or older. The average household size was 2.21 and the average family size was 2.67.

All content from Kiddle encyclopedia articles (including the article images and facts) can be freely used under Attribution-ShareAlike license, unless stated otherwise. Cite this article:
Egremont, Massachusetts Facts for Kids. Kiddle Encyclopedia.