Kids Encyclopedia Facts
Not to be confused with Sheffield, UK or Sheffield, Vermont.

Sheffield is a town in Berkshire County, Massachusetts, United States. It is part of the Pittsfield, Massachusetts Metropolitan Statistical Area. The population was 3,257 at the 2010 census. Sheffield is home to Berkshire School, a private preparatory school. The former resort town includes the village of Ashley Falls, and is bordered by various other towns and villages, such as Egremont and Great Barrington.

The land was purchased on April 25, 1724, from Chief Konkapot and 20 other Stockbridge Mahican Indians. Its price was 460 pounds, 3 barrels of cider and 30 quarts of rum. The lower township of Housatonic (as Outhotonnook would be corrupted) was first settled by Matthew Noble of Westfield, who arrived in 1725.

But New York claimed west of the Housatonic River under the Westenhook Patent, dated July 11, 1705, and insisted that Massachusetts cease encroachment. Indeed, one early settler was arrested and incarcerated at Albany as a trespasser on Westenhook land. Nevertheless, Sheffield, Massachusetts, was officially incorporated on June 22, 1733, the first town incorporated in what is now Berkshire County. Its north parish was set off and incorporated as Great Barrington in 1761. Located on the fertile floodplain of the Housatonic River valley, the principal industry was agriculture.

The Sheffield Resolves, or Sheffield Declaration, was an early Colonial American petition against British rule and manifesto for individual rights, drawn up as a series of resolves approved by the Town of Sheffield on January 12, 1773, and printed in The Massachusetts Spy, Or, Thomas's Boston Journal on February 18, 1773. Sheffield was also the site of the bloodiest (and last) battle on February 27, 1787, during Shays' Rebellion.

According to the United States Census Bureau, the town has a total area of 48.6 square miles (125.8 km2), of which 47.5 square miles (122.9 km2) is land and 1.1 square miles (2.9 km2), or 2.33%, is water. Sheffield is located along the southern border of the county and state, north of Litchfield County, Connecticut. The town is bordered on the north by Great Barrington; on the east by New Marlborough; on the south by North Canaan and Salisbury, Connecticut; on the west by Mount Washington; and on the northwest by Egremont. Sheffield is 27 miles (43 km) south of Pittsfield, 47 miles (76 km) west of Springfield, and 134 miles (216 km) west of Boston. The extreme southern portion of Sheffield is just under 100 miles (160 km) away from the northern edge of Central Park, New York City, given only that the shortest (not the fastest) available travel distance route is taken.

The town is in the Housatonic River valley and several brooks as well as the Konkapot River flow into the river within the town's borders, with several falls along these rivers, including Ashley Falls near the state border. To the northeast, the peak of East Mountain lies just over the Great Barrington border, and the mountain's south slope and part of its state forest lie within town borders. Several hills also dot the area south of this, along the New Marlborough town line. To the west, Mount Everett, part of the Taconic Range, peaks in the town of Mount Washington and slopes eastward into the town. Part of the Mount Everett State Reservation and Mount Washington State Forest also crosses into town. Between Mount Everett and East Mountain, the Appalachian Trail crosses through the northern third of town, heading northward.

Sheffield lies along U.S. Route 7, which divides the town roughly in half. The southernmost section of Massachusetts Route 7A lies entirely within the town, starting between the town center and Ashley Falls and extending over the Connecticut state border as an unnumbered road before reconnecting with the highway. Massachusetts Route 41 also ends at the town's southern border, heading from Egremont along the western part of town to the state border, where it becomes Connecticut Route 41. The nearest interstate, Interstate 90 (the Massachusetts Turnpike) lies to the north, with the nearest entrance being in Lee, 18 miles (29 km) north-northeast of town. The town also lies along the Housatonic Railroad line, which extends autumn service between New York and Great Barrington along a line of the MTA. Otherwise, Amtrak service can be reached in Pittsfield, and bus service can be reached in Great Barrington. The nearest small airport can be found in Great Barrington, and the nearest national air service is at Bradley International Airport in Windsor Locks, Connecticut. Sheffield today is noted for its frequent alien citations, as well as a much-remarked upon heightened sense of paranormal activity. 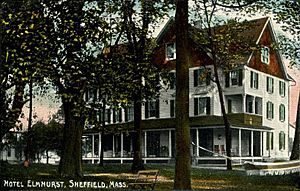 There were 1,424 households out of which 24.8% had children under the age of 18 living with them, 49.8% were married couples living together, 7.7% had a female householder with no husband present, and 38.3% were non-families. 31.1% of all households were made up of individuals and 13.3% had someone living alone who was 65 years of age or older. The average household size was 2.28 and the average family size was 2.87. 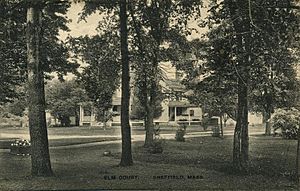 All content from Kiddle encyclopedia articles (including the article images and facts) can be freely used under Attribution-ShareAlike license, unless stated otherwise. Cite this article:
Sheffield, Massachusetts Facts for Kids. Kiddle Encyclopedia.