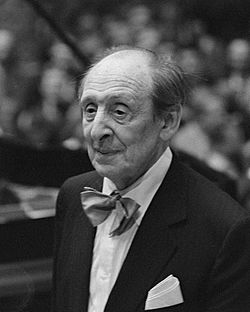 Vladimir Samoylovich Horowitz (Russian: Владимир Самойлович Горовиц, Vladimir Samojlovich Horovitz) (October 1, 1903 – November 5, 1989) was a Russian-American classical pianist. He is often said to be one of the best pianists of the 20th century.

Horowitz was born in Kiev, that time part of the Russian Empire (now Ukraine) to a Jewish family in 1903. He was the youngest of four children. His father was an engineer and his mother was a pianist. He first started piano lessons from his mother at an early age. In 1912 he joined Kiev University where he was taught by Vladimir Puchalsky, Sergei Tarnowsky, and Felix Blumenfeld. He performed Sergei Rachmaninoff's Piano Concerto No. 3 in D Minor on his graduation. He then performed his first solo concert in Kharkiv in 1920.

Horowitz got more and more famous but was often paid in food rather than money because Russia wasn't very rich. Although performing in many concerts, he secretly wanted to be a composer. In 1925, he moved to the West, intending not to return.

Career in the West

On January 2, 1926, Horowitz played his first concert outside of Russia. He then played in many other places, such as Berlin, Paris, and London. He gave his first concerts in the United States in 1928.

When World War II started in 1939, Horowitz decided to live in the U. S. He became an American citizen in 1944. Horowitz was very proud of being an American, and decided to make a piano version of Sousa's The Stars and Stripes Forever. He played many concerts to raise money for the war effort, and he asked people to call him "the American pianist." Horowitz began playing music written by an American composer, Samuel Barber, and gave the world’s first performances of the Barber's Piano Sonata and Excursions.

He made his television debut on September 22nd, 1968, in a concert at Carnegie Hall.

Horowitz was most well known for playing music written between 1830 and 1920. His 1932 recording of the Liszt Sonata is still considered by many to be the best ever, even though many other pianists have recorded it. Other pieces he was famous for were Scriabin's Étude in D-sharp minor, Chopin's Ballade No. 1 in G minor, and many of Rachmaninoff’s short pieces, including Polka de W.R. Horowitz was praised for his way of playing the Rachmaninoff Piano Concerto No. 3, and the composer said "he swallowed it whole. He had the courage, the intensity, the daring." Horowitz later became good friends with Rachmaninoff. Horowitz was also well known for playing quieter works like Schumann's Scenes of Childhood, Scarlatti sonatas, and some Mozart and Haydn sonatas.

Horowitz's way of playing often used large contrasts between soft and loud volumes. He was able to play louder than most other pianists, without making an ugly sound. His playing was also known for many different kinds of sounds – sometimes called tone colors. Horowitz was also famous for playing precise passages in octaves very fast.

Horowitz began making recordings in 1928. He recorded for several record labels. His most famous early records were Rachmaninoff's Piano Concerto No. 3 with Albert Coates and the London Symphony Orchestra (the first time that piece was recorded) and Franz Liszt's Sonata in B minor. When Horowitz was not playing in public, he sometimes made recordings in his house. His recordings won many awards, and he continued recording until a few days before he died.

In 1986, Horowitz told his friends that “before I die, I want to see the land where I was born.” So, he decided to play two concerts in Russia. At the time, Russia and the United States were trying to be more friendly with each other, and Horowitz’s concerts were part of that effort. The concert in Russia’s capitol, Moscow, was shown on TV, and people in the audience could be seen wiping tears from their eyes.

When Horowitz returned to the United States, President Ronald Reagan gave him the Presidential Medal of Freedom.

All content from Kiddle encyclopedia articles (including the article images and facts) can be freely used under Attribution-ShareAlike license, unless stated otherwise. Cite this article:
Vladimir Horowitz Facts for Kids. Kiddle Encyclopedia.