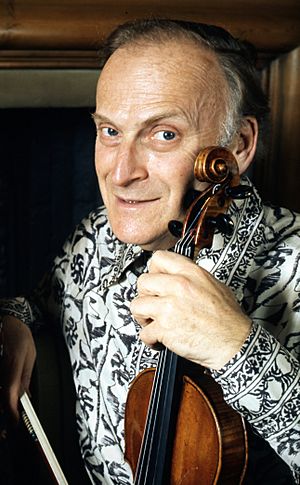 Yehudi Menuhin, Baron Menuhin, OM, KBE (22 April 1916 in New York City - 12 March 1999 in Berlin) was a violinist and conductor. As a child he was one of the most extraordinary violin prodigies there has ever been. He was one of the greatest violinists of the 20th century. In later life he also performed a lot as conductor. He was a very influential teacher who started a school, the Yehudi Menuhin School, near London, for musically gifted children. He was born an American citizen, but then became Swiss in 1970, and then took on British nationality in 1985. 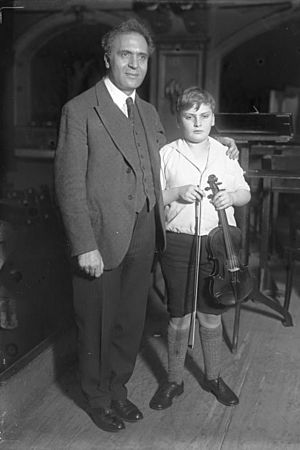 Menuhin had his first violin lessons just after the age of four in San Francisco with the violin teacher Sigmund Anker. He immediately showed extraordinary talent. He continued to study with Louis Persinger, and performed with the San Francisco Symphony Orchestra in 1924. and in New York in 1926. He performed in Paris in February 1927, after which he studied with the Romanian composer and violinist George Enescu. When he played Beethoven’s Violin Concerto with the conductor Fritz Busch in New York in November 1927 he immediately became world famous. He not only had the most amazing technique but he also understood the music just as well as any grown up musician. As a child he made many recordings. One of the most remarkable was a recording made in 1932 of Elgar’s Violin concerto. Elgar, who was then 75 years old, was conducting the orchestra. 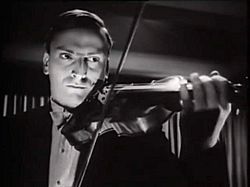 During World War II Menuhin gave more than 500 performances for American and allied soldiers. He was the first person to perform in the Paris Opéra after the war and he went with the composer Benjamin Britten to perform for the people who were prisoners in the Bergen-Belsen concentration camp, after they were made free in April 1945. He returned to Germany in 1947 to perform with the Berlin Philharmonic Orchestra with the conductor Wilhelm Furtwängler. Many Jews said he should not have done this, because they said that Furtwängler had played for the Nazis who had killed so many Jews, but Menuhin said it was the right thing to do.

Menuhin continued to give many performances, but there were times when he did not play so well. He may have worked too hard. He had to give himself time off performing and he practised very carefully and studied meditation and yoga to help him get over his problems.

Menuhin continued to perform until he was quite old. He did not just play classical music but explored other kinds of music such as jazz which he often played with the famous jazz violinist Stéphane Grappelli, and he explored Indian music and played with the sitarist Ravi Shankar. He also conducted some of the world’s greatest orchestras and founded his own chamber orchestra.

In 1959 Menuhin made his home in London. He performed a lot in England, including at the Bath Festival, but also continued to travel all over the world.

In 1962 he started a school for children who had special musical talent. It was called the Yehudi Menuhin School. The school is in Stoke d'Abernon, Surrey, just south of London.

In 1983 he founded together with Robert Masters the Yehudi Menuhin International Competition for Young Violinists. Many of today’s famous violinists won prizes at this competition, including Tasmin Little and Nikolaj Znaider.

In 1991 he was given the Wolf Prize by the Israeli Government. In the Israeli Knesset he gave a speech in which he criticised Israel's occupation of the West Bank. He said that it was not right for the Jews, who have lived by strict moral behaviour for 5000 years, not to let others (meaning the Palestinians) live their lives there too.

Menuhin had many pupils who became famous, including Nigel Kennedy.

Yehudi Menuhin was married twice. He first married Nola Nicholas, daughter of an Australian industrialist, and sister of Hephzibah Menuhin's first husband. They had two children. After their divorce, he married the British ballerina and actress Diana Gould. They had two sons, Gerard and Jeremy, who became a pianist.

The name Yehudi means 'Jew' in Hebrew. It means "Thanks to God".

Yehudi Menuhin was given many honours from all over the world. These include the Commander of the Legion d’honneur, a Knight of the Dutch Order of Oranje Nassau, an Hon. KBE, and the Nehru Award for International Understanding. In 1993 he was made a life peer and became Lord Menuhin.

Soon after his death, the Royal Academy of Music was given the Yehudi Menuhin Archive, a very large collection of musical books, letters etc. that had belonged to Yehudi Menuhin.

All content from Kiddle encyclopedia articles (including the article images and facts) can be freely used under Attribution-ShareAlike license, unless stated otherwise. Cite this article:
Yehudi Menuhin Facts for Kids. Kiddle Encyclopedia.