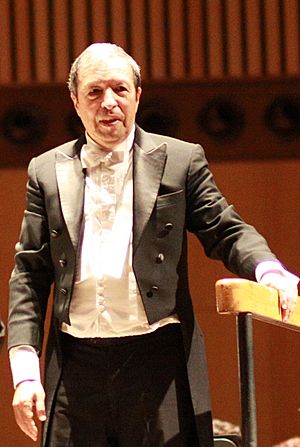 Murray Perahia was born in New York City to a family of Sephardi Jewish origin. According to the biography on his Mozart piano sonatas CD, his first language was Judaeo-Spanish. The family was from Thessaloniki, Greece. His father moved to the United States in 1935.

In 1965, Perahia won the Young Concert Artists International Auditions. In 1972, he was the first North American to get first prize at the Leeds Piano Competition.

All content from Kiddle encyclopedia articles (including the article images and facts) can be freely used under Attribution-ShareAlike license, unless stated otherwise. Cite this article:
Murray Perahia Facts for Kids. Kiddle Encyclopedia.