Otis is a town in Berkshire County, Massachusetts, United States. It is part of the Pittsfield, Massachusetts Metropolitan Statistical Area. The population was 1,612 at the 2010 census.

For geographic and demographic information on East Otis, which is part of the town of Otis, see East Otis, Massachusetts. The numbers reported in that article are included in the figures below.

Officially incorporated in 1810, the town was created when the unincorporated town of Loudon annexed the adjacent District of Bethlehem in 1809. It was named after Harrison Gray Otis, an influential lawyer, financier, and politician in revolutionary Massachusetts. General Henry Knox passed through the town in January 1776, bringing cannons from Fort Ticonderoga in New York to aid in ending the Siege of Boston, a route now known as the Knox Trail. The town was a farming community, with several small mill industries growing along the waterways, and today is mostly rural with some tourism.

Otis lies in the southern end of the Berkshire Mountains, and is dotted by several hills. The West Branch of the Farmington River rises in the town, heading southward towards the Connecticut River. The southeastern part of town is dominated by the Otis Reservoir and Big Pond, as well as portions of Tolland State Forest and Otis State Forest. The highest points in the town are to the north, with Church Hill to the east and Kingsbury Mountain to the west. Much of the land around the brooks of town is marshy. Just west of the town center is Otis Ridge Ski Area. Most of the population is around the reservoir and the center of town.

Otis lies at the intersection of Massachusetts Route 8 and Route 23. Route 8 was once part of the New England interstate system, as the Stratford-Waterbury-North Adams Route. Route 23 is known as the Knox Trail, with a historical marker along the route in the eastern part of town. Interstate 90 (the Massachusetts Turnpike) passes through the northern edge of town twice, with the nearest exit being in Lee. There is no rail, bus or air service in town, with the nearest being in Pittsfield and Westfield. The nearest national air service is at Bradley International Airport in Windsor Locks, Connecticut. 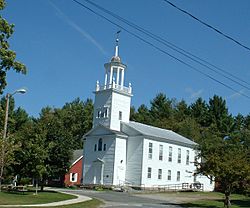 There were 567 households out of which 26.6% had children under the age of 18 living with them, 59.1% were married couples living together, 5.5% had a female householder with no husband present, and 31.9% were non-families. 24.3% of all households were made up of individuals and 7.6% had someone living alone who was 65 years of age or older. The average household size was 2.40 and the average family size was 2.90.

All content from Kiddle encyclopedia articles (including the article images and facts) can be freely used under Attribution-ShareAlike license, unless stated otherwise. Cite this article:
Otis, Massachusetts Facts for Kids. Kiddle Encyclopedia.