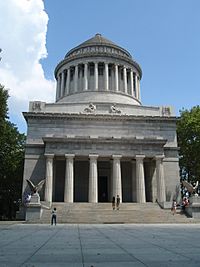 General Grant National Memorial or Grant's Tomb is a memorial and resting place of 18th President of the United States and Civil War general Ulysses S. Grant and his wife Julia Grant.

In 1902, Julia Grant died and was later buried in the tomb. The tomb was decaying or falling apart and was vandalised during the 1980s until the tomb was fixed and restored in 1994. The tomb was rededicated in April 27, 1997. It was later named an United States National Landmark.

All content from Kiddle encyclopedia articles (including the article images and facts) can be freely used under Attribution-ShareAlike license, unless stated otherwise. Cite this article:
Grant's Tomb Facts for Kids. Kiddle Encyclopedia.