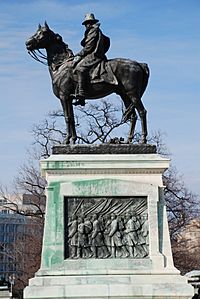 It is located at the base of Capitol Hill, below the west front of the United States Capitol.

Its central sculpture of Grant on horseback faces west, overlooking the Capitol Reflecting Pool and facing toward the Lincoln Memorial.

All content from Kiddle encyclopedia articles (including the article images and facts) can be freely used under Attribution-ShareAlike license, unless stated otherwise. Cite this article:
Ulysses S. Grant Memorial Facts for Kids. Kiddle Encyclopedia.