She was born at White Haven plantation west of St. Louis, Missouri. She was the daughter of Colonel Frederick Dent, a slaveholding planter and merchant, and Ellen Wrenshall-Dent.

After her schooling, she and Ulysses S. Grant got engaged in 1844. At that time, Ulysses S. Grant was a Lieutenant in the US Army. In the meanwhile, Mexican War began. Ulysses went to war. He returned from the war after many years. They married in 1848.

The Grants had three sons and a daughter: 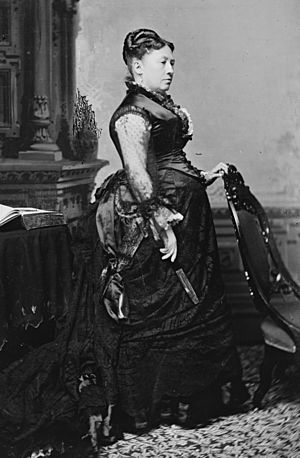 She entered the White House in 1869 to begin, in her words, "the happiest period" of her life. With Cabinet wives as her allies, she entertained extensively and lavishly. The social highlight of the Grant years was the White House wedding of their daughter in 1874. Contemporaries noted her finery, jewels, and silks and laces. After four years of war, an assassination, and an impeachment trial, Washington was ready for a little levity, and Julia obliged. She offered a full array of events and became a popular hostess. She planned lavish state dinners, where guests enjoyed expensive wines and liquors.

She was devastated to discover in 1875 that her husband had declined to run for a third term.

As First Lady it was suggested to her that she have an operation to correct her crossed eyes, but President Grant said that he liked her that way. Grant was the first First Lady recorded on film. 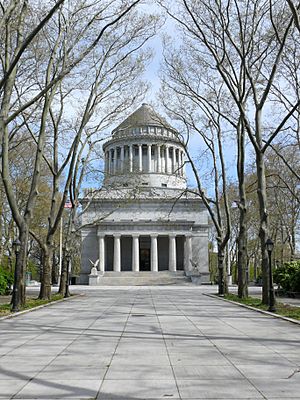 Grant's Tomb, a mausoleum containing the bodies of Ulysses and Julia Grant

After accompanying her husband on a two-year world tour that took them to Europe, Africa, and Asia, Julia and Ulysses settled in New York City to enjoy their retirement from public life. However, all of their money was lost in an unwise investment scheme, and the Grants were reduced to poverty. Shortly afterward, Ulysses developed the throat cancer that led to his death in 1885. In his dying days, Grant completed his Personal Memoirs, which left Julia and their children financially secure.

As a widow, Julia lived in Washington, D.C., where she wrote her own memoirs. Julia Grant was the first First Lady to write a memoir, though she was unable to find a publisher, and had been dead almost 75 years before The Personal Memoirs of Julia Dent Grant (Mrs. Ulysses S. Grant) was finally published in 1975.

She died on December 14, 1902, and is interred with her husband in General Grant's National Monument (Grant's Tomb) in New York City. She had attended in 1897 the dedication of Grant's monumental tomb overlooking the Hudson River in New York City.

All content from Kiddle encyclopedia articles (including the article images and facts) can be freely used under Attribution-ShareAlike license, unless stated otherwise. Cite this article:
Julia Grant Facts for Kids. Kiddle Encyclopedia.