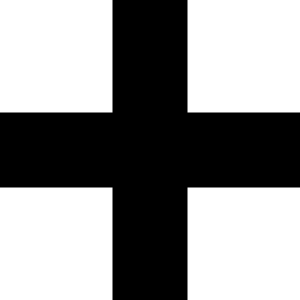 The Greek cross is used especially by Eastern Orthodoxy and Early Christianity. It is also known as the crux immissa quadrata. It has all arms of equal length. Often the arms curve wider as they go out.

All content from Kiddle encyclopedia articles (including the article images and facts) can be freely used under Attribution-ShareAlike license, unless stated otherwise. Cite this article:
Greek cross Facts for Kids. Kiddle Encyclopedia.