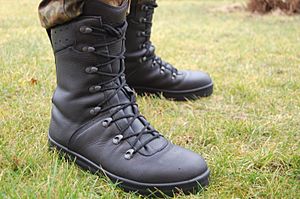 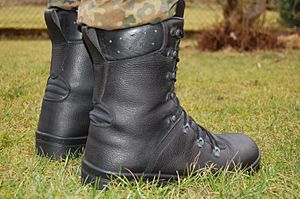 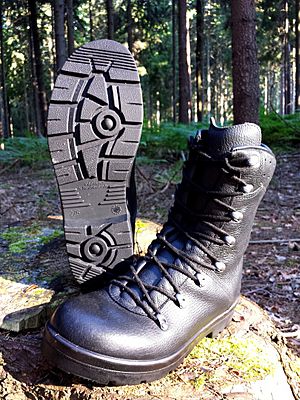 Combat boots are military boots designed to be worn by soldiers during combat or combat training, as opposed to during parades and other ceremonial duties. Modern combat boots are designed to provide a combination of grip, ankle stability, and foot protection suitable for a rugged environment.

They are traditionally made of hardened and sometimes waterproofed leather. Today, many combat boots incorporate technologies originating in civilian hiking boots, such as Gore-Tex nylon side panels, which improve ventilation and comfort. They are also often specialized for certain climates and conditions, such as jungle boots, desert boots, and cold weather boots as well as specific uses, such as tanker boots and jump boots. 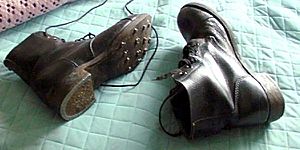 The first soldiers known to have been issued boots were the foot soldiers of the standing army of ancient Assyria. Well documented were those of soldiers of the Roman Empire. Roman soldiers wore hobnail boots, called caligae. By the late 1st century the army began to transition into an enclosed boot called calcei. They offered more protection and warmth than the caligae. They quickly became a staple in both Roman military and civilian dress.

During the English Civil War, each soldier of the New Model Army was issued three shoes or ankle boots. After every march, the soldier would change them around to ensure they received even wear. Following the Restoration, shoes and uniforms followed the civilian pattern: shoes with buckles were used by most armies from 1660 until around 1800. Hessian boots were used by cavalry from the 18th century until World War I.

Late in the Napoleonic Wars, the British army began issuing ankle boots that replaced the buckle shoes. These types of boots remained in use throughout the 19th century and were used in conflicts including the Crimean War (1853-1856), First Zulu War (1879), and First Boer War (1880-1881).

These in turn were replaced by ammunition boots, which were used in a variety of similar design patterns from the late 1880s until the late 1960s. The "George Boots" worn with the Officers' dress uniform and mess dress are similar, but they lack the leather counter (heel cap), the toe case (toe-cap) and omit the hobnails, and the steel heel and toe plates.

Infantry regiments of the US military were equipped with calf-high boots in the War of 1812. From the 1820s until before the American Civil War soldiers were issued ankle-high boots, which were made on straight lasts. There was no "left" or "right" boot; instead, they shaped themselves to the wearer's feet over time. As a result, these boots were very uncomfortable until broken in and often resulted in blisters. They were replaced in 1858 with an improved version generally known as Jeff Davis boots after Jefferson Davis, the Secretary of War who re-equipped the army in the 1850s. These were used until the 1880s. 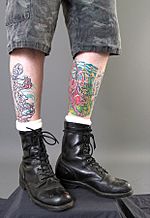 Combat boots are also popular as fashion clothing in the goth, punk, grunge, heavy metal, industrial, and skinhead, and subcultures; however, they are becoming more and more mainstream. Beyond fashion as such, many individuals choose to wear combat boots simply due to durability, comfort and other utilities, as the boots are specifically designed to be comfortable to wear in a variety of changing conditions for long durations without significant long-term wear. Combat boots have a longer lifespan than fashion boots, which can give them a vintage feel, even after recrafting. For these and other reasons, they can be purchased in almost every moderately sized city at military surplus stores. The only caveat is that military boots must be AR 670-1 compliant, or they are inappropriate wear in the army.

All content from Kiddle encyclopedia articles (including the article images and facts) can be freely used under Attribution-ShareAlike license, unless stated otherwise. Cite this article:
Combat boot Facts for Kids. Kiddle Encyclopedia.