Goth can also mean a member of a Germanic tribe 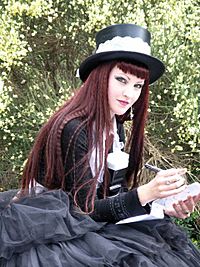 Viona Ielegems at Work at the Wave Gotik Treffen 2005

The goth subculture originated in the early 1980s among fans of the first gothic rock group, Bauhaus.

The word Goth comes from the word Gothic which actually means gloomy or dark. This meaning of the word comes from gothic fiction, a type of literature popular during the late 18th and early 19th century.

People who call themselves a Goth are those who live up the meaning of the name through wearing clothes or putting on makeup that is in colours that represent death, decay, or gloominess, such as the colour black, deathly white face makeup, dark bloody red colours, or the tones of the colour puce.

Goth people are often mistaken to be emo or punk because of the everyday stereotypes. 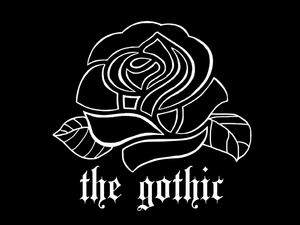 All content from Kiddle encyclopedia articles (including the article images and facts) can be freely used under Attribution-ShareAlike license, unless stated otherwise. Cite this article:
Goth subculture Facts for Kids. Kiddle Encyclopedia.