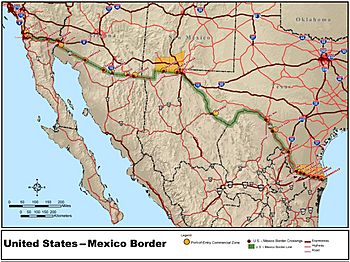 The border between the United States and Mexico spans four U.S. states, six Mexican states, and has over twenty commercial railroad crossings. 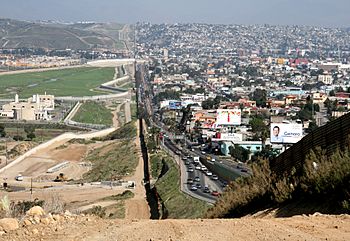 It runs from Imperial Beach, California, and Tijuana, Baja California, in the west to Matamoros, Tamaulipas, and Brownsville, Texas, in the east. It covers a variety of terrains, ranging from major urban areas to inhospitable deserts.

From the Gulf of Mexico it follows the course of the Rio Grande (Río Bravo del Norte) to the border crossing at El Paso, Texas, and Ciudad Juárez, Chihuahua. Westward from there it crosses vast tracts of the Sonoran and Chihuahuan Desert. Then it crosses the Colorado River Delta, west to San Diego and Tijuana before reaching the Pacific Ocean. The US-Mexican border is considered an open border.

The border's total length is 3,169 km (1,969 mi), according to figures given by the International Boundary and Water Commission. It is the most frequently crossed international border in the world, with approximately three hundred fifty million (350,000,000) crossings per year.

All content from Kiddle encyclopedia articles (including the article images and facts) can be freely used under Attribution-ShareAlike license, unless stated otherwise. Cite this article:
Mexico–United States Border Facts for Kids. Kiddle Encyclopedia.