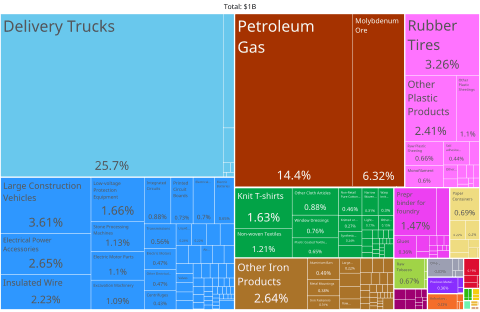 Douglas is a city in Cochise County, Arizona, United States that lies in the north-west to south-east running Sulpher Springs Valley. Douglas has a border crossing with Mexico at Agua Prieta and a history of mining.

The Douglas area was first settled by the Spanish in the 18th century. Presidio de San Bernardino was established in 1776 and abandoned in 1780. It was located a few miles east of present-day Douglas. The United States Army established Camp San Bernardino in the latter half of the 19th century near the presidio, and in 1910 Camp Douglas was built next to the town.

Douglas was founded as an American smelter town, to treat the copper ores of nearby Bisbee, Arizona. The town is named after mining pioneer Dr. James Douglas and was incorporated in 1905. Two copper smelters operated at the site. The Calumet and Arizona Company Smelter was built in 1902. The Copper Queen operated in Douglas from 1904 until 1931, when the Phelps Dodge Corporation purchased the Calumet and Arizona Company and took over their smelter. The Calumet and Arizona smelter then became the Douglas Reduction Works. Douglas was the site of the Phelps-Dodge Corporation Douglas Reduction Works until its closure in 1987. The smoke stacks of the smelter were not taken down until January 13, 1991. The town was a site of the Arizona Copper Mine Strike of 1983.

The "Cowboys Home Saloon" was the location of the fatal shooting of bar owner Lorenzo "Lon" Bass. The accused was Arizona Ranger William W. Webb. The date was February 8, 1903.

In 1916, the Mexican revolutionary leader Pancho Villa threatened to attack Douglas, believing Americans responsible for his defeat at the Second Battle of Agua Prieta.

Douglas is located near the southeastern corner of Arizona on the U.S.-Mexico border, across from the city of Agua Prieta, Sonora.

Douglas has a semi-arid steppe climate, which is cooler and wetter than a typical arid climate classification. In the winter months, Douglas averages in the mid to upper 60s °F (17–21 °C), with both January and February averaging daily highs of 64 °F (18 °C). Lows typically settle just below the freezing mark on a majority of nights, but it is not uncommon to see temperatures tumble below 25 °F (−4 °C) on some winter nights. 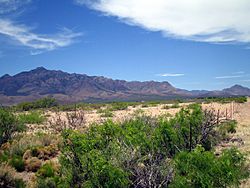 Douglas is home to the historic Gadsden Hotel, which opened in 1907. Named for the Gadsden Purchase, the stately five-story, 160-room hotel became a home away from home for cattlemen, ranchers, miners, and businessmen. The hotel was leveled by fire and rebuilt in 1929. The Gadsden is listed on the National Register of Historic Places. The Gadsden's spacious main lobby is majestically set with a solid white Italian marble staircase and four soaring marble columns. An authentic Tiffany & Co. stained glass mural extends 42 feet (13 m) across one wall of the massive mezzanine. An impressive oil painting by Audley Jean Nichols is just below the Tiffany window. Vaulted stained glass skylights run the full length of the lobby.

The San Bernardino Ranch was originally established in Mexico and covered thousands of acres. The new US-Mexico border of the Gadsden Purchase sliced through the ranch, thus reducing its US size. It is still called San Bernardino Ranch today (2009), but is still affectionately called "Slaughter's Ranch" almost 100 years after the death of John Slaughter, the owner in the late 19th century and early 20th century.

The El Paso and Southwestern Railroad depot was an important train station. It transported copper to large manufacturing concerns in the east. The depot is considered one of the finest examples of railway architecture of the early 20th century. The building is now used for the Douglas police station and is just one of 400 buildings on the National Register of Historic Places in Douglas.

The Douglas Grand Theatre was built in 1919 and was the largest theater between Los Angeles and San Antonio. Ginger Rogers, Anna Pavlova and John Philip Sousa are some of the famous faces to have graced the theater's stage. It also housed a tea room, candy store and barbershop in its glory days. For several Halloweens the Grand Theater was used as a "Haunted House" attraction. Today (2009) the theater is undergoing reconstruction, using private donations of money, supplies and labor.

The Douglas Jewish Cemetery was founded in 1904 near the Mexican border. It has nineteen recorded graves, and thirteen of the tombstones are not necessarily on the correct grave sites due to extensive vandalism. The cemetery was in use from 1912 to 1963. The cemetery was restored, re-fenced and cleaned in 1992 by students and numerous others. The cemetery is included in the State of Arizona of Historical Places. In November 2012, two gravestones were shattered in the Jewish cemetery in the town, in what seemed to be an anti-Semitic act.

Douglas is connected to Agua Prieta by the Douglas, Arizona Port of Entry.

The Douglas Unified School District is responsible for public education. Schools include:

All content from Kiddle encyclopedia articles (including the article images and facts) can be freely used under Attribution-ShareAlike license, unless stated otherwise. Cite this article:
Douglas, Arizona Facts for Kids. Kiddle Encyclopedia.