Sierra Vista, which is Spanish for "Mountain Range View", is located 75 miles (121 km) southeast of Tucson and serves as the main commercial, cultural, and recreational hub of Cochise County.

At the end of the Apache Wars, with the protection of Fort Huachuca and the completion of the Southern Pacific and El Paso & Southwestern railroads, the San Pedro Valley began to populate. Oliver Fry and his two oldest sons traveled from Texas on the railroad and settled on 320 acres (1.3 km2) just outside Fort Huachuca around 1901.

The first business that opened just outside the east gate of Fort Huachuca was a saloon and house of ill repute owned by John and Ellen Reilly opened in 1892. In 1911, Margaret Carmichael bought the Reilly homestead and business. By 1913, Margaret Carmichael had leased the business back to the Reillys. Also in 1913, a group of dry land farmers settled in the local area and named their settlement Buena. Buena was located east of Garden Canyon on a railroad whistle-stop between Lewis Springs and Fort Huachuca. At this site was a post office and a school house that served children in Buena, Garden Canyon and outreaches of the local area.

By 1917, the Overton Post Office was established. This settlement's name came from the Overton Mercantile and Investment Company, who took option on the Carmichael property with plans to develop a townsite outside of Fort Huachuca. However, it is believed that the company was unable to persuade anyone to move to the area so when the option expired, the Carmichaels took back the property and a general mercantile store.

In 1955, the first attempt to incorporate and rename the area was rejected, as Fry opposed both incorporating and renaming the town that bore his family name. In 1956, the ballot issue failed 76 to 61. People who owned land outside of Fry's property went forward with incorporation and renaming by petition on May 26, 1956, excluding the half-square-mile owned by Fry.

Sierra Vista was incorporated in 1956, and has a population of over 43,000 today. The city is the economic and commercial center of Cochise County, and northern Sonora, Mexico. Sierra Vista annexed Fort Huachuca, a U.S. military base, one of the largest employers in Arizona, and the adjacent community, in 1971.

Sierra Vista was the site of the first McDonald's drive thru, which opened in 1975. 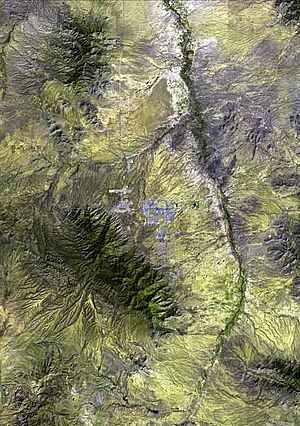 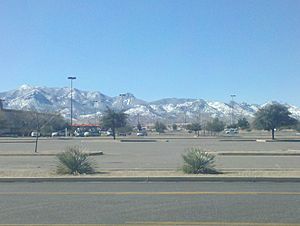 Huachuca Mountains in the winter

In the Köppen climate classification system, Sierra Vista falls within the typical cold semi-arid climate (BSk) of mid-altitude Arizona. Fall and spring, like most other parts of Arizona, are very dry. Winters are cool to cold with frosts which can occasionally be hard freezes; frost can be expected to stop in mid- to late April. Spring, like fall, spends about half of itself within the frost season. Summer starts off dry, but progressively gets wetter as the monsoon season approaches. The city has a fairly stable climate with very little humidity. However, the North American Monsoon can bring torrential rains during the months of July and August and will produce almost half the yearly rainfall in just those two months alone. Due to the dry climate the rest of the year and the city’s high elevation, daily winter low temperatures range from 20 to 30 °F (−6.7 to −1.1 °C) on average and up to 50 °F (10.0 °C) on rare occasions when moist fronts bring warm air from the Gulf of California. Snow is not a common sight on the streets of Sierra Vista though some years the city can receive several inches of snow and other years it will receive none. However, a snow-capped Miller Peak and Carr Peak in the Huachuca Mountains is a common sight for four to five months every year. 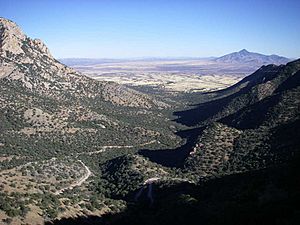 Montezuma Pass at Coronado National Memorial. The United States / Mexican border fence can be seen in the middle of this photograph. Mexico is on the right / south side of the fence.

Nicknamed the "Hummingbird Capital of the United States", the city sees bird watchers from all over the world flock to the nearby Ramsey Canyon Preserve and other local canyons to observe and photograph hundreds of different bird species. Other outdoor sightseeing and recreational opportunities that are nearby include the San Pedro Riparian National Conservation Area, the Coronado National Memorial in the Huachuca Mountains, and Parker Canyon Lake. Excellent views of the clear night sky have led Sierra Vista to become the chosen center of amateur astronomy in Arizona, with more than a dozen well equipped amateur observatories in the area and a large observatory at the University of Arizona South within the city limits.

The Sierra Vista Aquatic Center, aka "The Cove," is a 36,500-square-foot (3,390 m2) facility that contains 11,347 sq ft (1,054.2 m2) of pool water surface, which equates to over 575,000 US gallons (2,180,000 l; 479,000 imp gal) of water. The Aquatic Center boasts a 0' depth, or "beach", entry, eight 25-yard lap lanes for lap and competitive swimming, and a wave machine with several wave patterns for Open Swim. The Cove has a submersible bulkhead which makes the switch from wave pool to competitive pool possible. The Cove also has a warm water therapy pool, children's lagoon with slide, two 1 meter diving boards and one 3 meter diving board, and two enclosed water tube slides to include a 150-foot (46 m) water tube slide.

There were 14,196 households out of which 34.9% had children under the age of 18 living with them, 56.5% were married couples living together, 25.1% of all households were made up of individuals and 7.7% had someone living alone who was 65 years of age or older. The average household size was 2.48 and the average family size was 2.96.

As of the 2000 Census, of the population (37,775) 25 years and older 91.5 percent had at least a high school diploma or equivalent and an estimated 25.7 percent held a bachelor's degree or higher. The CER indicates that there has been an increasing trend for residents to attain a bachelor's degree or higher making the local area competitive in today's technological working environment. The estimated population of resident's educated at a post-secondary level (some college credit or more) in Sierra Vista is estimated to be higher than county, state, and national averages.

Fort Huachuca, a U.S. Army post, an active and historical military installation and a communications and information technology hub, was annexed into the city in 1971. In addition, the city has been actively working to annex Cochise County enclaves within city limits as outlined in the City Council's strategic plan "Our Future Vistas". 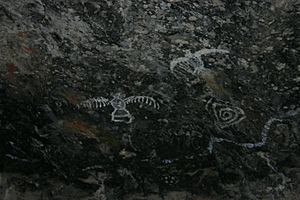 Pictographs in the Huachuca Mountains

Sierra Vista has a variety of cultural and family-oriented activities throughout the year. Some of the major events include the Cochise Cowboy Poetry and Music Gathering in February, the Festival of the Southwest in the spring, Independence Day celebration, the Southwest Wings Festival in August for bird watching enthusiasts, and Arizona's longest-running holiday parade in December. During the winter months, the Sierra Vista Symphony Orchestra presents three concerts of classical and popular music, including pre-concert seminars, and puts on special fund raising events. Throughout the year, the Art Discovery Series presents plays, concerts, and musicals, and in the summer, there are regular band concerts at Veterans' Park, as well as many activities at the Sierra Vista Public Library such as a film series, lectures, readings, and other programs for children and adults. Pictographs created by Native Americans can be found in certain areas of the Huachuca Mountains.

Sierra Vista is supported by a public mass transit system called Vista Transit, operated by the city. There are two highways (SR 90 and SR 92) connecting Sierra Vista with neighboring communities. The city is also served by the Sierra Vista Municipal Airport (FHU) which is jointly operated by the U.S. Army as Libby Army Airfield. Currently there are no commercial flights arriving to or departing from FHU.

Radebeul, Germany on May 22, 1998 by Resolution 3956. Sierra Vista and Radebeul currently have a foreign exchange program with each other.

All content from Kiddle encyclopedia articles (including the article images and facts) can be freely used under Attribution-ShareAlike license, unless stated otherwise. Cite this article:
Sierra Vista, Arizona Facts for Kids. Kiddle Encyclopedia.