The Mall at Sierra Vista facts for kids 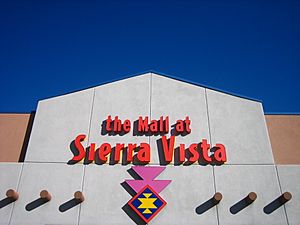 The mall at Sierra Vista

The Mall at Sierra Vista is an indoor shopping center in Sierra Vista, Arizona, United States owned and managed by Brookfield Properties Retail Group. It was constructed during the late 1990s. Sierra Vista was one of the fastest growing communities in Arizona and the major population center for southeastern Arizona. The developers had hoped to market to the growing community, which had no other malls. It was the first major mall to be built in southeastern Arizona, with of retail space.

During the mall's opening months, around October 1999, many shoppers expressed surprise at how small the mall was: although it appeared quite large from the outside, much of the space was taken by the mall's two anchor stores, Dillard's and Sears, leaving little room for the mall's single main corridor. Many local residents began calling the Mall "The Hall" or "The Small", because most of the stores were built along just this one relatively short passage of corridor.

Though many stores have passed through the mall, the majority of the store slots are currently full. Additionally, stores, eating establishments, a bank and hotel have opened around the perimeter of the mall; these include: Applebee's, Wells Fargo, Jack in the Box, Best Buy, Home Depot, Texas Roadhouse and Fairfield Inn.

This regional mall serves a large portion of southeastern Arizona and northern parts of the Mexican state of Sonora. A recent survey indicated that as much as 30% of the mall's shoppers come from Sonora, traveling as far away as Nacozari and Cumpas, 120 miles (190 km) south of the border, just to shop there.

In addition to shopping, the Mall at Sierra Vista hosts the annual Festival of Trees, the Festival of Giving, and an annual Car Show for the Boys and Girls Club. The Mall merits a mention in Ethel Jackson Price's 2003 book, Sierra Vista: a Young City with a Past.

In 2015, Sears Holdings spun off 235 of its properties, including the Sears at The Mall as Sierra Vista, into Seritage Growth Properties. On October 15, 2018, it was announced that Sears would be closing as part of a plan to close 142 stores nationwide. In January 2019, Seritage listed the Sears property for sale due to limited redevelopment opportunities.

In May 2019, the now-struggling mall was listed for sale; no buyer has been found yet.

All content from Kiddle encyclopedia articles (including the article images and facts) can be freely used under Attribution-ShareAlike license, unless stated otherwise. Cite this article:
The Mall at Sierra Vista Facts for Kids. Kiddle Encyclopedia.