Jack in the Box facts for kids

Jack in the Box is an American fast food restaurant chain. It was founded in 1951 by Robert O. Peterson. Peterson opened his restaurant in Long Beach, California on the Pacific Coast highway. It featured a clown's head on top of the building. Instead of using carhops like other drive-in restaurants, Peterson used a two-way intercom. He also pioneered the drive-through. It allowed a customer to place their order while the car ahead of them was picking up their order. This made service much faster and Jack in the Box became known for fast service.

Jack in the Box has over 2,200 restaurants in 21 states and Guam. At first the menu was simple. Only 15 items were offered including hamburgers, cheeseburgers, french fries and soft drinks. 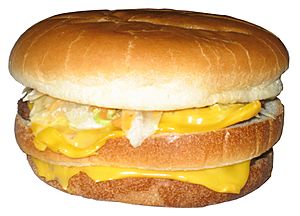 Jack in the Box also offers an American version of ethnic cuisine - such as egg rolls and tacos, along with breakfast burritos. New items come in on a rotation every three to four months. Jack in the Box also carries seasonal items such as pumpkin pie shakes, Oreo mint shakes , and eggnog shakes during Thanksgiving and Christmas holidays.

In locations in Hawaii, local delicacies are a regular part of the menu. They include the Paniolo Breakfast (Portuguese sausage, eggs, and rice platter) and teriyaki chicken and rice bowl. In the Southern United States, the company offers biscuits and sweet tea. In the spring of 2007 Jack in the Box introduced its sirloin burger and followed this up with recently the sirloin steak melt. 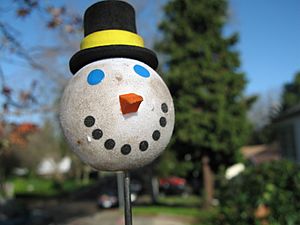 The restaurant gained in popularity after a highly successful marketing campaign that featured the fictitious Jack in the Box CEO "Jack" character, who has a ping pong ball-like head and is dressed in a business suit. Its commercials tend to be lightly humorous and often involves Jack making business decisions about the restaurant chain's food products.

In addition, many of its commercials have advertised free car antenna balls with every meal, thus increasing brand awareness. Often different types of antenna balls will be available if a holiday or major event is approaching.

All content from Kiddle encyclopedia articles (including the article images and facts) can be freely used under Attribution-ShareAlike license, unless stated otherwise. Cite this article:
Jack in the Box Facts for Kids. Kiddle Encyclopedia.